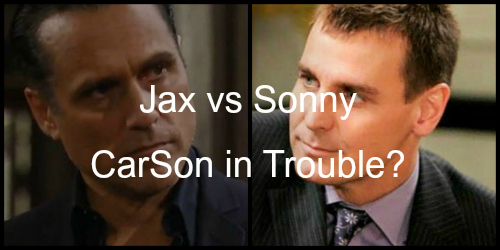 General Hospital (GH) spoilers reveal that Jasper Jacks (Ingo Rademacher) is headed back to Port Charles and that spells trouble for Carly Corinthos (Laura Wright) and Sonny Corinthos (Maurice Benard). Can their marriage survive the return of Jax?

We heard Carly phoning Jax this week to fill him on her Josslyn Jacks (Eden McCoy) kidney investigation but things will take some twists and turns soon that bring Jax to town because some things can’t be handled via a phone call.

It’s been a minute since Jax was in Port Charles and although he knows Sonny and Carly got hitched for the fifth time, that doesn’t mean he has to like the mobster playing step-dad to his daughter. We can expect animosity from the get-go.

We won’t see fan-favorite Ingo Rademacher until the end of July and General Hospital spoilers indicate he’ll hang around Port Chuck for about a month. But what brings the hunky Aussie to town? It’s that kidney mystery!

Remember, Josslyn was initially diagnosed with Fifths Disease, also called Slapped Cheek Syndrome, but that’s reportedly a misdiagnosis. General Hospital spoilers hint that Joss might have something more serious wrong with her.

That means the race to find answers about her “donated” kidney is all the more urgent. If Josslyn gets sick, that’s a sound reason for Jax to come running back to Port Charles. Plus, Jax being stressed about his daughter will put him on edge.

Jax already doesn’t like Sonny – they’ve got the Brenda Barrett (Vanessa Marcil) rivalry in their past – plus the shared Carly history. They also both got with Sam Morgan (Kelly Monaco) and Jax was involved with Sonny’s sister Courtney Matthews (Alicia Willis).

The bottom lines is neither guy likes the other and Carly will be 100% focused on her daughter. When Sonny and Jax go at each other, Carly will be furious that they’re not concentrating on the issue at hand and are being petty macho jerks.

Can Carly and Sonny’s marriage survive the stress of Joss’s illness plus Jax being in town stirring the pot? That remains to be seen since Sonny and Jax know how to push each other’s buttons and Carly will be tense and stressed.

Ingo Rademacher told ABC Soaps in Depth that he doesn’t know the plot details but said Jax must “have a conflict of some kind, right? He’s not coming over for a cup of tea and to say hi.” Then Ingo added, “There’s no way that Jax and Sonny aren’t going to butt heads…”

It’s not that Jax wants Carly back, per se, it’s more that Jax hates every single thing that Sonny stands for, his mob lifestyle, and how running a cartel puts the people around Sonny in danger, including (potentially) Josslyn.

As Josslyn’s kidney mystery heats up, Sonny will turn his glare on Joss’s doctor Hamilton Finn (Michael Easton). If Jax likes the lizard-loving doc – which seems likely – that could be more fuel for the fire in the battle of Jax vs Sonny.

Will Carly and Sonny crack under all the pressure that’s about to hit them? Or have they been through so much that their marriage is impervious to disaster? Is CarSon rife for a blow-up since Carly has always been tempted by Jax’s sexy and smooth demeanor?

Share your comments below on this upcoming GH plot and be sure to check back with CDL often for more General Hospital spoilers and news.