General Hospital (GH) Spoilers: Johnny Discovered, on the Run From Nathan – Will Maxie Interfere to Save Mobster Again? 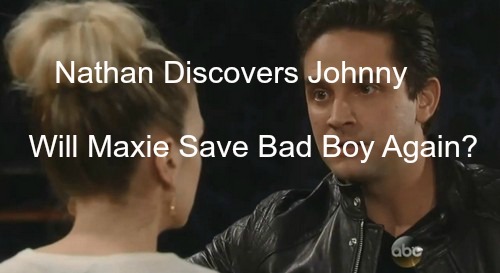 “General Hospital” (GH) spoilers tease that Johnny Zacchara (Brandon Barash) may not be on the down-low much longer in Port Charles. He’s been skating around town and seeing mob associates as part of his revenge scheme. That means word will get out that he’s back.

When mob informants whisper to the PCPD that Johnny has been seen, Nathan West (Ryan Paevey) will likely be ready to resume the man hunt. He already missed Johnny once when Maxie Jones (Kirsten Storms) gave the bad boy her car and some cash to skate out of town – will Maxie do the same again?

We saw that part of Johnny’s plot to take down Valerie Spencer (Brytni Sarpi) was to snap pics that make it look like she was taking a bribe – but why put himself in the pics? Won’t that alert the cops that he’s in town? That seems less than clever…

Seems like his face has to be shown to make the photos credible – otherwise it looks like Val was just taking money from a stranger for no reason. Whether it’s the photos or mob chatter, Johnny’s presence will soon be known.

GH spoilers indicate Maxie will once again be ahead of the cops in their search for Johnny – thanks to Dillon Quartermaine (Robert Palmer Watkins). Dillon lets slip that Lulu Spencer (Emme Rylan) has a dude on the Haunted Star and Maxie will go investigate.

If Johnny is around, he probably won’t hide from Maxie – he knows she won’t rat him out. Of course, Maxie may assume the worst – that Lulu has Johnny on her boat tucked away for sex romps. Lulu will deny it, but Maxie won’t buy it.

All of this is leading to an explosive showdown. Valerie will land in hot water over the bribery set up and when the pics are seen, Dante Falconeri (Dominic Zamprogna) will recognize Johnny. Valerie will be stunned to find out the mobster was the one who stopped to help with her car.

That should seem suspect to Dante – he knows there’s no reason that Johnny would be after Valerie – but he knows about Lulu’s past with Johnny. The guy is a detective – surely Dante can figure out that Johnny is doing Lulu’s dirty work and he and Nathan can go after Johnny.

The problem is, Maxie doesn’t want Johnny caught and she might intentionally hinder Nathan’s investigation to give Johnny time to get away. GH spoilers indicate she’ll interfere in some way to slow up Nathan and give Johnny some lead time.

If Nathan figures out that’s what Maxie is doing, there may be hell to pay. Could Johnny’s presence in town plus Maxie aiding and abetting spell trouble for her relationship with Nathan? Maxie has promised her hot cop she’d be on the straight and narrow and, so far, she has been.

But this plot development could have Nathan doubting whether he can trust her and if her antics might wreck his career as a Port Charles cop. Will the Johnny shenanigan split Maxie and Nathan – and drive a permanent wedge between Dante and Lulu?

Share your thoughts in the comments below and come back to CDL often for more “General Hospital” spoilers, news and updates.