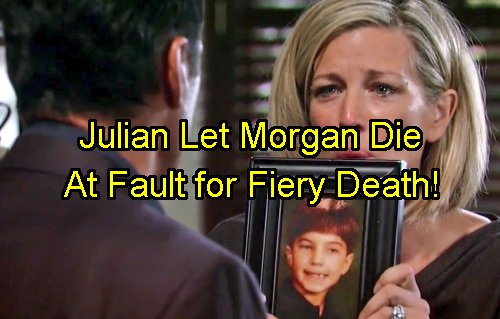 New General Hospital (GH) spoilers hint that Julian Jerome (William deVry) may be guilty of letting Morgan Corinthos (Bryan Craig) die. Did Julian know Morgan stole the car and did nothing to try and save the life of his enemy’s son?

The night that Morgan died, Julian was at The Floating Rib and so was Ava Jerome (Maura West). Julian parked out front and then his driver Pete was called away. This coincided with Morgan coming out drunk and agitated and attacking TJ Ashford (Tequan Richmond).

Then Morgan drove the car away. But did Julian know what happened? Pete came in to tell Julian that someone stole the car. Could Pete have told Julian that he saw Morgan but we didn’t see that part? Is that why Pete was killed before he could talk to Jason Morgan (Billy Miller)?

Julian set this car bomb up so that Sonny Corinthos (Maurice Benard) would take the fall for trying to kill him. Many heard Sonny’s threats to take care of Julian after he skated on the murder charges at his trial. Julian knew Pete might die, but Morgan was not part of the original plan. 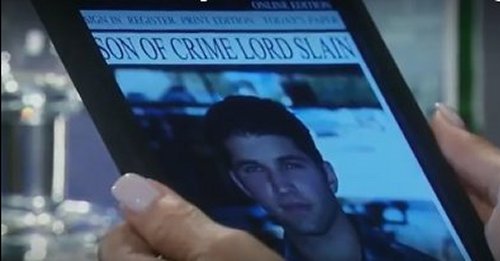 Julian wouldn’t care if his driver died and it would make the attempt on his life seem genuine. But now that Curtis Ashford (Donnell Turner) and Jason figured out that it was Julian’s business van blocking the security cameras, that changes everything.

Julian faking an attempt on his life is bad, but what’s really bad is if he knew Morgan took the car that was rigged to explode. Ava was worried about Morgan and Julian told her “If Morgan screws up bad enough this time, then maybe Kiki will dump him once and for all.”

With Ava messing with his pills and Julian ordering the bomb, the Jeromes are 100% responsible for Morgan’s death!

Given the timing, Julian had to suspect that Morgan is the one that took the car, but he didn’t care. If Morgan died in the bombing, that meant he was out of Kiki Jerome’s (Hayley Erin) life once and for all. Morgan would also be out of Ava’s life – Julian knows Ava still loves the guy and it was a problem.

Julian used the phrase “This is a golden opportunity” when discussing Morgan. Julian would see this as a big win for him. Sonny would be blamed for the explosion, Julian could punish his enemy horribly by allowing his son to die – and Morgan would be out of his sister and niece’s lives.

This is awful to think about, but Julian has shown many times that he is a terrible person. He’s cold-blooded and will do what he has to do to get what he wants. And what he wants is Sonny in jail. Julian is still dealing with Oscar Jessup and that mystery guy might play a role in this bomb situation.

Is Julian terrible enough to know Morgan stole an explosive car then not warn the kid to get far away before it went boom? If he did do this, is there any way to redeem Julian? Share your comments and check back with CDL for the latest General Hospital spoilers and news.