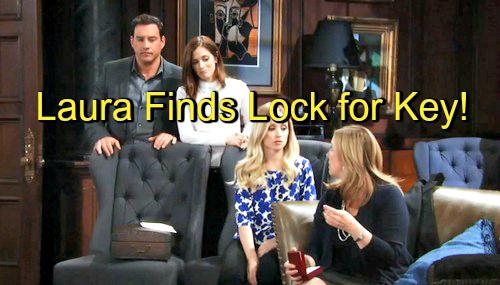 “General Hospital” (GH) spoilers indicate that viewers will be in for a shock on next week’s episodes. It won’t be too long before Laura Spencer (Genie Francis) finds the lock that fits the key that Helena Cassadine (Constance Towers) left to her but she’ll find more questions than answers when she sees what it unlocks.

Although Nikolas Cassadine (Tyler Christopher) encouraged his mom to forget the grandma drama, Laura couldn’t let it go. Laura said – and she’s right – that even if she ignored the key, that doesn’t mean that Helena’s final scheme would stop.

General Hospital spoilers tease that with both Laura and Lulu Spencer (Emme Rylan) living at Wyndemere, they talk and then decide to go rummaging through the mansion for ideas. Looks like they will find a trunk that the key fits. Laura should remember the trunk if it’s the one Stefan Cassadine had back in the day.

Back in 1998, a trunk figured prominently in a storyline involving Stefan Cassadine, Laura, and Katherine Bell, the woman Stefan was involved with. If you know your GH history, you know back in the day, Laura fell for Stefan and there was a question for a time if Nikolas was the child of him or Stavros.

Laura was held captive by Stavros Cassadine, but fell for his kindler gentler brother Stefan. In the ’98 story, Stefan had a trunk of Laura’s things included Nikolas’ baby blanket, some gowns, and an heirloom Cassadine ring that Stavros gave Laura as an engagement ring.

GH spoilers reminds us that around the same time that Stefan was looking at things in the trunk, he had a portrait made of Laura that he kept hidden away. Katherine admired the ring when she saw Stefan with it and he told her it was a family heirloom and ended up giving it to Katherine as an engagement ring.

The trunk turned into an issue between Stefan and Katherine once she realized it was Laura’s stuff. Of course, Katherine died not long after and the police wanted to look at the trunk back in the day. So what’s in the trunk now? That’s the big question.

GH spoilers ask is it the portrait that Stefan had made of Laura? Is it the ring that Stavros gave to Laura? Is it something else we’ve never seen? Is the memento of love lost a sign that one of these Cassadine men is alive somehow?

The only one of the brothers that Laura loved was Stefan – so if it’s love lost, it would make sense that it was Stefan. Helena always doted on Stavros and saw Stefan as less-than. So did Helena have Stefan stashed somewhere for the past many years?

He’s supposedly dead, but we know that dead isn’t always dead in Port Charles. GH spoilers have indicated for some time that Laura would go on an adventure after the will reading. Will whatever Laura finds in the trunk send her out of Port Chuck on a quest?

Will Laura go looking for Stefan if the clue indicates he’s alive? There’s also still the loose end about the “eldest Cassadine male.” The writers made too big of a deal out of that for it not to go somewhere. If Stefan or Stavros is alive, that would displace Nikolas as the heir apparent.

What do you think GH fans? What do you hope Laura finds in the trunk? Do you think her love Stefan is alive? Stefan portrayer Stephen Nichols is back at “Days of Our Lives” as Patch so he’s not available, but they could always recast the part.

Share your comments below on where you think Laura’s mystery will lead and what you hope happens. Seems like she’s overdue for love. Be sure to check back with CDL every day for more “General Hospital” spoilers and news.