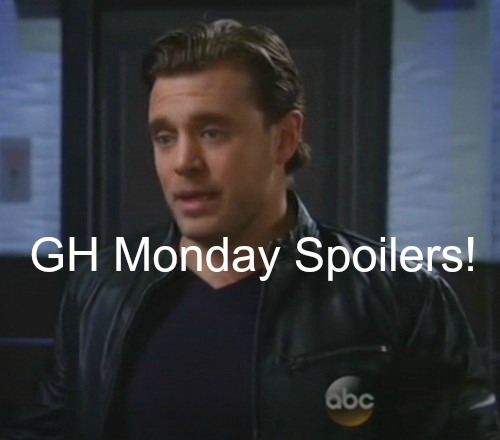 “General Hospital” (GH) spoilers for Monday, January 18 reveal that Johnny’s plot to set Valerie up goes down in flames while she’s trapped in the cabin as it goes up in flames. Here’s what to expect on the Monday show for Val, Lulu, Johnny, Dante and more.

Lulu Spencer (Emme Rylan) has made a huge mistake trusting Johnny Zacchara (Brandon Barash) and now she’s scrambling to clean up her mess. She shows up at the cabin where Johnny told her he was holed up – but she has no idea Valerie Spencer (Brytni Sarpi) is there too.

Johnny took off in Valerie’s car, but Lulu doesn’t know he cleared out and she shouts for Johnny. Looks like Valerie will hear Lulu calling and she’ll try to call out for help, but the gag is still on her mouth. Worse yet, her flailing knocked over a candle and now the cabin is on fire.

Will Lulu see the flames? GH spoilers tease that it could be Lulu that saves Valerie from the blaze. Of course, that complicates things for Lulu because she has no reason to be out there and Val heard the phone call with Johnny asking someone to bring his bag and his cash.

Val heard Johnny say “you owe me” and then Lulu shows up. Hmm. Not much of a coincidence. Meanwhile, back at the PCPD, the desk sergeant showed Dante Falconeri (Dominic Zamprogna) the pics of Valerie taking money from Johnny and him getting into her car.

Looks like Johnny’s takedown plan was still in effect. Too bad that Dante and Jordan Ashford (Vinessa Antoine) both know that Valerie is not a dirty cop and would never consort with Johnny. Dante also knows for sure that Lulu was consorting with Johnny.

Dante and Jordan try to figure out what’s going on with Johnny. With these pics plus Dillon Quartermaine (Robert Palmer Watkins) mentioning that Valerie is late for a dinner date, surely they can figure out that Johnny was targeting Valerie and it all leads back to Lulu.

Meanwhile, Jake Spencer (James Nigbor) overheard the two witnesses telling Jason Morgan (Billy Miller) how great that Sam Morgan (Kelly Monaco) is for convincing them to clear his name. But Jake turns dark and tells Jason that Sam isn’t that great – Jason wants to know what he means.

Good thing little Jake has a therapy appointment… Kid needs some help. Sam wants to know why Liz Webber (Rebecca Herbst) is in Jason’s hotel room. Liz could string her along but will admit that Jason is doing her a solid since something hinky is going on at her house.

Will Sam and Liz still be chatting at the door when Jason brings Jake back? Will Jake see Sam and his dad walk off together? Jake is clearly focusing on Sam – is this going to get bad soon? GH spoilers tease that Sam will be in danger shortly, so we’ll see.

Kristina Corinthos (Lexi Ainsworth) talks to her dad Sonny Corinthos (Maurice Benard). There’s someone he wants her to stay away from – but whom? Kristina is also worried about her school suspension and will come clean to Sam about the trouble she’s in.

All this and more on the Monday, January 18 GH episode. Don’t miss a moment then come back to CDL for more scoop and “General Hospital” spoilers and news.