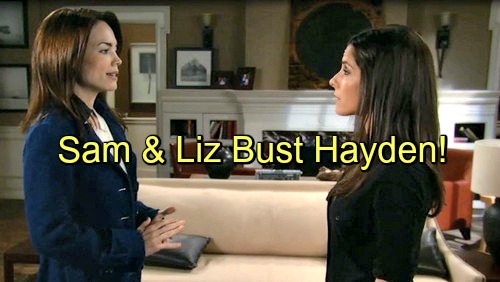 “General Hospital” (GH) spoilers indicate that Liz Webber (Rebecca Herbst) and Sam Morgan (Kelly Monaco) are on the cusp of cracking the case about Hayden Barnes (Rebecca Budig) past as Rachel and Damien Spinelli (Bradford Anderson) will help out.

General Hospital spoilers for next week’s episodes say that although Sam and Liz are not working together, they are both focused on the same goal – protecting Spencer Cassadine (Nicolas Bechtel) from yet another bad experience with a pseudo-mom. Both Liz and Laura Spencer (Genie Francis) have asked Sam to keep looking into Hayden.

Also, Sam just enlisted the help of Damien Spinelli (Bradford Anderson) and within a week it looks like The Jackal will have a lead for Sam to follow up on. GH spoilers wonder if it will have something to do with Baxter Corbin (Tom Parker)?

Meanwhile, Helena Cassadine’s (Constance Towers) will reading, which starts on Monday’s episode, is supposed to offer some information that will have Liz wondering what happened to Jake Spencer (James Nigbor). Then Liz will have an idea on how to figure out what happened to him, and starts digging into the past.

But GH spoilers say Liz will be shocked when she find out something about Hayden rather than about Jake. Will this be the same information that Sam also finds out? Will the former rivals soon reach the same conclusion about Hayden?

You have to admit it’s nice to see Liz and Sam working on the same goal rather than at cross-purposes – especially since Laura is also invested in finding out the truth about her new daughter-in-law. But what will they discover that Rachel is so desperate to hide?

And will Nikolas Cassadine (Tyler Christopher) be angry at his BFF, cousin and mother for continuing to pry into the past of his wife when he specifically asked them all to back off? He may be mad, but no doubt the ladies in his life will force him to listen to whatever it is they found out.

So what do you think GH fans? What is Hayden-Rachel’s dirty secret? GH spoilers promise that when Hayden’s secret does come out, it will stun several Port Charles families. Does that mean she has a tie to an existing character?

Some General Hospital spoilers have hinted Hayden might be the offspring of the awful Larry Ashton (Hugo Napier) but that’s not certain yet. She could be related to any number of locals – so there’s no telling what the truth will be, but we do know that Sam and Liz are hot on her trail with help from Spinelli.

Share your comments below on the Hayden mystery and come back to CDL often for more “General Hospital” spoilers and news.