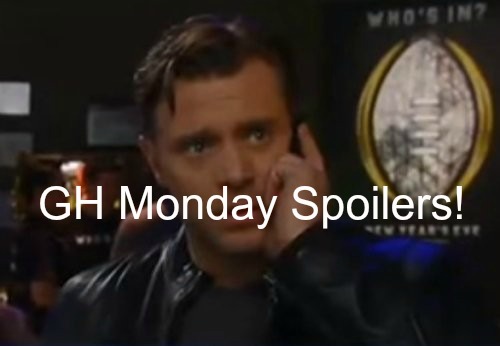 “General Hospital” (GH) spoilers tease that several sexy moments will be interrupted on the Monday, January 4 episode of GH. Here’s what happens with Johnny, Lulu, Jason, Sam, Franco, and more as New Year’s in Port Charles carries over into next week’s shows.

We saw Johnny and Lulu jump into an epic make out session and that picks up on Monday’s episode with Lulu interrupting their increasingly intimate moment. Lulu initially shuts down Johnny’s lovemaking overtures and explains that Dante will lock him up – or kill him – if he catches him.

Johnny makes a great case for why she should go ahead and get naked with him anyway – will his persuasive techniques work? Will Lulu shag the wanted man? This is one more reason Dante will soon suspect that Lulu is up to no good.

Also interrupted in New Year’s romance is Nina Clay (Michelle Stafford) and Franco (Roger Howarth). Kiki Jerome (Hayley Erin) always has the worst timing when it comes to walking in on her pseudo-parent roommates. Once Franco hustles Kiki out of the way, he’s all business.

Franco is determined to show Nina how much he loves her by taking her to bed. Too bad Nina is plagued with doubts about her desirability because of Silas Clay (Michael Easton) cheating on her decades ago. Silas is the only man that Nina has been with, so her innocence is very appealing to Franco.

Looks like he’ll be able to get her calmed down and will take her to bed finally. Woo-hoo – go FraNina! The final interruption of Monday’s show ruins a close moment between Sam Morgan (Kelly Monaco) and Jason Morgan (Billy Miller).

It’s the stroke of midnight and it looks like they’re both leaning in for a kiss when an urgent call from Liz Webber (Rebecca Herbst) interrupts and wrecks the tender moment. Jason has to run off to help with a crisis owing to Jake Spencer (James Nigbor).

Damien Spinelli (Bradford Anderson) and Ellie Trout (Emily Wilson) see the near miss and encourage Sam not to give up. Spinelli thinks JaSam is a love for the ages and they’re destined to be together. Will Sam be encouraged by this? We’ll see.

Kiki tries to talk sense to Morgan Corinthos (Bryan Craig) who’s playing chicken with the mob. Morgan also chats up Dante about his marital problems. Dante thinks he can work things out with Lulu – at least until he finds out what she’s been up to with Johnny.

All this and more on GH on Monday, January 4. Watch every moment then come back to CDL for more “General Hospital” spoilers, news and updates.