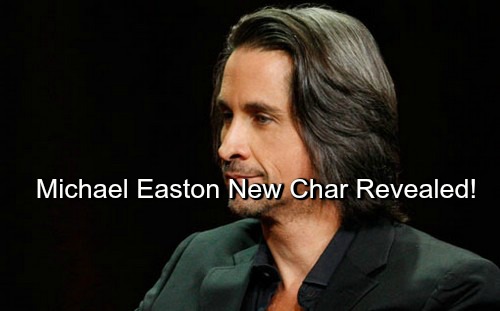 “General Hospital” (GH) spoilers reveal that when Michael Easton returns to the ABC screen, his first air date will be Friday, March 18 and he’ll play an all-new character named Marcus Byrne. So who is this guy and what is his mission in Port Charles?

According to Soap Opera Digest, Byrne is “intelligent, reserved, and hellbent on revenge.” GH spoilers also indicate the new character will be a doctor of some sort. But who is he – and who does he want revenge on – are the big questions.

There is no Byrne family or other characters of that last name in the General Hospital archives, so there are no ties there to help. And if it’s revenge Marcus wants, we have to lean towards some of the local Port Charles villains as his likely targets.

Sonny Corinthos (Maurice Benard) would be the least interesting nemesis for Byrne since he’s always got people gunning for him. General Hospital spoilers say that what would be far more enticing is if Julian Jerome (William deVry) or Jason Morgan (Billy Miller) were the targets.

Julian feels like his hands are finally clean of all the mob mess and he’s free to start his new life with Alexis Davis (Nancy Lee Grahn) on the up and up. But we all know there’s only one way out of the mob – in a body bag!

General Hospital spoilers ask if Marcus Byrne is someone that the Jerome family did dirty in the past? Remember Julian was gone out of Port Chuck for a long time before he returned as Derek Wells then was unmasked as Julian Jerome. There’s lots of room there for a new storyline that started out of the city years ago.

Jason is another interesting option because he was off the canvas for a while when he was missing and presumed dead but was really doing dirty work for Helena Cassadine (Constance Towers). What’s intriguing about Byrne wanting vengeance on Jason, if that’s the plot, is that Jason’s memory is wiped.

Jason would have no clue who the guy is or what he did to incur his wrath. Of course, Byrne could also be after Franco (Roger Howarth) who literally has a string of bodies in his wake, but he’s also reformed. Whatever the storyline, it will be great to have Michael Easton back.

What do you think GH fans? Are you hoping that Marcus Byrne is in town to take on Julian? Jason? Franco? Share your comments below and check back with CDL often for more “General Hospital” spoilers and news.