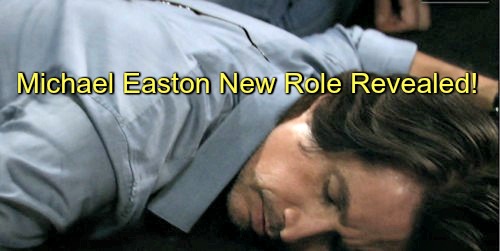 “General Hospital” (GH) spoilers hint that Michael Easton’s new role as he returns to GH may be completely unlike sympathetic healer Dr Silas Clay he played before. In fact, Easton may be Port Charles’ new big bad – cartel boss Dixon that has ties to Paul Hornsby (Richard Burgi).

The same day that Frank Valentini posted the video announcement that Easton was returning and Nathan Varni confirmed via Twitter that Easton would be in a new role, Dixon was mentioned for the first time in a tense and important conversation between Paul and Ava Jerome (Maura West).

You’ll recall Paul is operating behind the scenes while he has Ava out front as the face of the Jerome cartel. But even Paul himself is not in charge. Paul said he wanted Ava at her gallery for the latest arms shipment saying, “I wanted you to be there in person to see Dixon face to face.”

Then he added, “Raj works for Dixon and Dixon is the one we need to impress.” We’ve known for months that Paul was answering to someone but didn’t know who it was – only that it was someone powerful and related to the cartel.

Dixon is a new character that’s never been mentioned before yet seems to play prominently in Paul’s strategy. Plus, Paul has never cared before about impressing anyone. He’s always in the power position when we’ve seen him talking to anyone.

It would be very exciting to see Easton back in town as a bad guy mob boss/gun runner. They could play with that a lot with interactions with Ava. Imagine Ava finding herself attracted to him and saying he looks familiar. That’s an interesting possibility.

What do you think GH fans? Would you like to see Easton as a big bad mob boss Dixon instead of a lifesaving healer? Granted even Silas had some darkness – he did kidnap Avery to take her bone marrow to save Ava – but he was never a really bad guy.

A darker role for Easton would allow him to really test his acting chops and would be a thrill for GH fans. Share your comments below on what you hope for Michael Easton’s return to GH and check back with CDL often for more “General Hospital” spoilers.