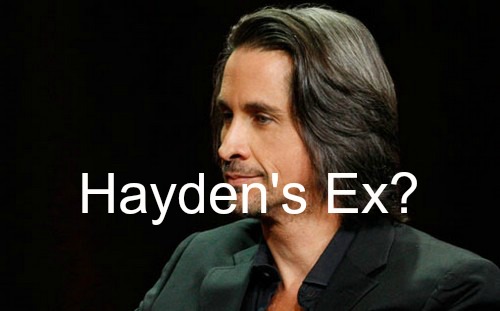 “General Hospital” (GH) spoilers tease that Michael Easton’s new character may be tied to Hayden Barnes (Rebecca Budig) and all her dirty secrets. Nikolas Cassadine (Tyler Christopher) will soon start digging more aggressively into the background of his new wife.

We’ve already seen Nikolas checking out Baxter Corbin – the guy from Vegas who called Hayden “Rachel.” Lucky for Hayden/Rachel, she unknowingly bought a little time because Liz Webber’s (Rebecca Herbst) burned down and Nikolas rode off to the rescue to help Liz.

However, GH spoilers also reveal that Nikolas installing Liz and her kids at Wyndemere will play a major factor in Hayden being able to keep her secrets. Liz will spot Hayden up to no good very soon. One secret that has been a persistent GH spoiler for months is that Hayden has an ex of interest.

Could Michael Easton be the dubious ex that’s part of what Hayden is hiding? Was he part of her scandalous past? So far we know that Baxter Corbin was some sort of private wealth investor. Was Hayden involved with a Bernie Madoff type scam? Or is it something even shadier?

Hayden does seem to have a very clear grasp on the business world and has been doing a good job overseeing many aspects of ELQ – so high-stakes business does seem to be part of her background. Was Hayden working with Baxter to bilk the wealthy out of their money?

Did Hayden come to town with her eye on doing the same thing in Port Charles? Could Nikolas and his millions be more at risk than he thinks? Also, many GH fans have speculated that Nikolas and Hayden’s marriage could be invalid because she didn’t sign the marriage license as Rachel.

However – that doesn’t seem likely. Hayden is clever and doing a legal name change would be critical to distancing herself from her scandalous past. What’s more likely is that the pre-nup Nikolas had Hayden sign could be invalid.

He sprung it on her at the last minute just as they were walking into the chapel to get married and she had no attorney to counsel her. That could be fought in court as her signing under duress because he pressured her to sign so they could marry.

We’re hoping that whomever Michael Easton will be playing when he hits Port Charles, that it will be a bad guy. Silas Clay was nice but we’ve been there and done that. It would be fantastic to see Easton playing dastardly instead.

Fingers crossed he shows up in time for February spoilers and hopefully in time to stir up some real trouble for Hayden. Will Nikolas figure out who Hayden/Rachel is before her ex comes calling? GH spoilers indicate that Nikolas will soon make a call to a private investigator.

GH spoiler video shows Nik asking someone to investigate his new wife – but doesn’t that seem like a day late and a dollar short? What do you think GH fans? Are you excited to see Michael Easton’s new character? Are you hoping he’s tied in to Hayden’s storyline?