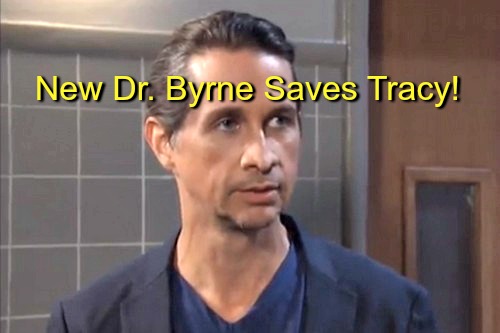 “General Hospital” (GH) spoilers reveal in an upcoming episode that Tracy Quartermaine’s (Jane Elliot) condition will worsen and Dr Mayes (Matt Riedy) is off the mark with his diagnosis. Looks like it will be Dr Griffin Munro (Matt Cohen) and possibly Dr Marcus Byrne (Michael Easton) that will save Tracy’s life.

Consider this. Easton’s new doc Marcus has a first air date of the March 18 episode of GH and then we know that Ned Ashton (Wally Kurth) is coming back to Port Charles on March 28. Is Ned back because his mom is on her deathbed? Will things get that dire?

We know that Doc Mayes thinks Tracy has cancer but Griffin, as a top neurologist, doubts the diagnosis. Mayes is trying to push Griffin aside and Tracy is completely dismissive of the hot doc. But Monica Quartermaine (Leslie Charleson) gave Griffin permission to pursue his own diagnosis.

If the new doc, Marcus, is the one to save Tracy’s life, General Hospital spoilers wonder what speciality he’ll practice. You may remember that Dr Silas Clay (also Michael Easton) was an oncologist, a cancer doc. But Griffin doesn’t think it’s brain cancer, and likely they wouldn’t make Easton’s new character the same as his last.

Perhaps Marcus is an expert diagnostician like Dr House, MD. It’s doubtful he’ll be a brain surgeon, since Griffin is the new neurologist and GH doesn’t need two of those. They also have an OB/GYN Dr Kelly Lee (Minae Noji) and Monica is a cardiologist.

So what speciality could Marcus be? GH doesn’t need a podiatrist or proctologist… Infectious disease is a maybe but seems odd for an area like Port Charles. Whatever he is, let’s hope he can help save Tracy. If she has been poisoned, perhaps Marcus will recognize the symptoms.

He could be a sexy former military doc… They’ve got one of those over on “The Young and The Restless” and it’s good stuff. GH spoilers reveal that although Tracy stubbornly insists on going home, she’ll soon be back at the hospital because of worsening symptoms.

Tracy will start to have more staring lapses, memory problems, mood swings and other neurological symptoms. In addition to cancer, there are other causes of brain lesions that could explain what’s wrong with Tracy. They can be caused by infection, radiation or poison.

There’s still the lingering question of why Larry Ashton (Hugo Napier) made that one episode appearance and why Tracy got sick not long after she saw him. Could Larry have either poisoned or infected her?

Let’s hope Tracy doesn’t have some sort of infectious disease… Remember a decade ago when Port Chuck had a deadly encephalitis outbreak? Is this another epidemic that could run rampant around town if it’s not recognized in time?

What do you think GH fans? Will Dr Byrne and Dr Munro (Easton and Cohen) be the dynamic duo that saves malevolent matriarch Tracy Q? Share your comments below and come back to CDL often for more “General Hospital” spoilers and news.