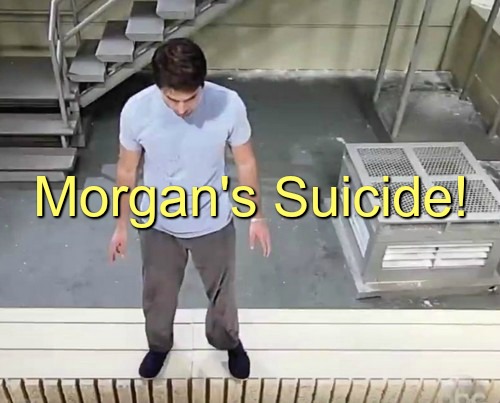 “General Hospital” (GH) spoilers reveal that Morgan Corinthos (Bryan Craig) will be literally on the edge and contemplating suicide and ending his life on Wednesday’s and Thursday’s episodes. We know that Morgan is in a bipolar spiral, but we haven’t seen him like this before. What pushes him to the extreme of considering suicide?

Morgan will be at the PCPD ranting that he wants to be let go so he can go see Kiki Jerome (Hayley Erin) who was shot during the gun deal gone bad. Michael Quartermaine (Chad Duell) tries to calm him down and it looks like Morgan will be released and allowed to go to GH.

Kiki will be brought into the ER intubated, bleeding out, and looking to be in critical condition. Ava Jerome (Maura West) will physically attack Paul Hornsby (Richard Burgi) when she hears that her daughter was shot, but Paul has a defense – he was just doing his job.

Although Paul is clearly a sketchy guy, it does seem like the undercover operation was the real deal. The problem wasn’t the bust, but that Morgan decided to interfere – and decided to send Kiki what was practically an engraved invitation to meet him there.

Remember Morgan left that oddly specific voice mail telling Kiki what was going on and precisely where he would be. Kiki felt like she had to go save Morgan from himself and even took a bullet to save his life. Ava finds out all of this and all her rage then turns on Morgan.

We know that Ava loves Morgan – even though she denies it and tries to avoid the temptation – but this crisis may finally kill her affection for her under-aged former BF. Ava will scream at Morgan that it’s all his fault that Kiki is fighting for her life.

In fact, Ava is vocalizing what Morgan is already feeling. She will give a voice to his inner demons telling him that same thing. As Kiki clings to life and takes a turn for the worse, Morgan will decide he can’t be trusted around anyone he loves.

Sonny Corinthos (Maurice Benard) warned him that he posed a danger to others unless he took his meds. Sonny even kicked him out because he said his untreated mental health issues could put Avery at risk. And now what Sonny foretold has come true, but with Kiki rather than Avery.

We’ll see a distraught Morgan head up to the roof and contemplate suicide. He even goes so far as to stand on the edge of the building and look down, ready to step off and end his life. But Morgan isn’t the first person to stand at that spot and ponder their own mortality and guilt.

Elizabeth Webber (Rebecca Herbst) teetered on that same edge after she found out she was pregnant five years ago and wasn’t sure who was the father. Heather Webber (Robin Mattson) jumped off the roof but managed to survive. Both were suffering mental health issues.

Morgan will survive this health crisis – likely one of his parents will come to his rescue – but he won’t emerge unscarred from the ordeal. Like Liz and Heather, we’ll likely see Morgan ensconced at Shadybrook soon to balance out his mental health and keep him safe.

Will Kiki’s shooting and fight for life finally be the catalyst that gets Morgan to properly address his mental health issues? Can Morgan be saved from himself? Will Kiki survive? GH spoilers indicate Ava and Franco (Roger Howarth) will see Kiki through this, but who will see Morgan through his crisis?

Share your thoughts below and the hot action for GH February sweeps and come back to CDL often for more “General Hospital” spoilers and news.