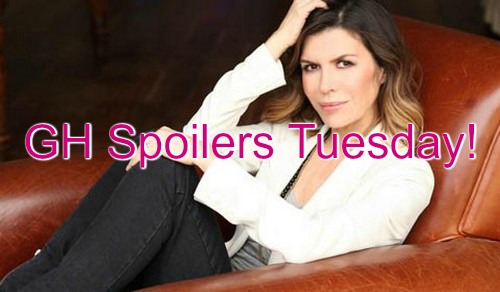 “General Hospital” (GH) spoilers reveal that on Tuesday February 9, Liz Webber (Rebecca Herbst) finally comes to the breaking point and realizes she and Jason Morgan (Billy Miller) will never be together and also that she’s at fault for Sam Morgan’s (Kelly Monaco) injuries.

Liz just confessed to Franco (Roger Howarth) that she believes Jake Spencer (James Nigbor) hates Sam because she hated and blamed Sam for Jason walking out on her. Now Liz knows she poisoned the mind of a fragile child and, as a result, her house is blown to bits and Sam is in the ER injured (so it wasn’t a total loss).

Liz will soon come clean to Jake about her bad choices. Meanwhile, Alexis Davis (Nancy Lee Grahn) gets a call about Sam and rushes to the ER to check on her eldest. Julian Jerome (William deVry) should also get the call which will take him away from a chat with his sister.

Ava Jerome (Maura West) delivers an “interesting” wedding present to her brother and his future bride, but Ava also needs some advice. Julian notices Ava seems distracted and demands that she come clean on the trouble she’s into and how bad it is.

Will Ava reveal Paul Hornsby’s (Richard Burgi) in the Port Charles mob scene? If Ava wants Julian’s help, she needs to tell him the whole sordid mess. Ava wants out of the mob so she won’t lose custody of Avery and needs Julian’s guidance. Will he help or refuse?

Over at the PCPD, Anna Devane (Finola Hughes) tries a different tactic with Paul – flirtation. Paul has no lady loves right now, so he will definitely be intrigued by what Anna is dangling – the ladies seem to be his Achilles’ heel.

Paul will open up to Anna and they’ll talk about his kids and he’ll mention his daughter. Anna will later ask Mac Scorpio (John J York) to find out about the kid. If it’s Susan that Paul is talking about, she’d be 33 – younger than Hayden Barnes (Rebecca Budig) and older than Darby Collette (Jesica Ahlberg).

But we all know soap operas have magic time machines to age people up or down. Is Susan one of these two ladies or a new woman we know nothing about? How will info on Susan help Anna corner Paul and get the goods on him?

Also scheming soon will be Nathan West (Ryan Paevey) and Maxie Jones (Kirsten Storms). Nathan gets serious with Maxie and tells her he wants to deepen their romance. He wants them to move in together, but her apartment is overflowing with spare Falconeris.

With Lulu Spencer (Emme Rylan) and Rocco there, no way can Maxie and Nathan comfortably cohabitate. They will discuss a plan to get Lulu back with soon-to-be-ex hubby Dante Falconeri (Dominic Zamprogna) so they can have their BFFs back together and the place to themselves.

Nathan wants to move in with Maxie but Lulu is an issue – with her there plus Rocco, it’s just too crowded for their romance to have a chance. Don’t miss a moment of the Tuesday February 9 to find out what they’re planning – and check back with CDL often for more “General Hospital” spoilers.