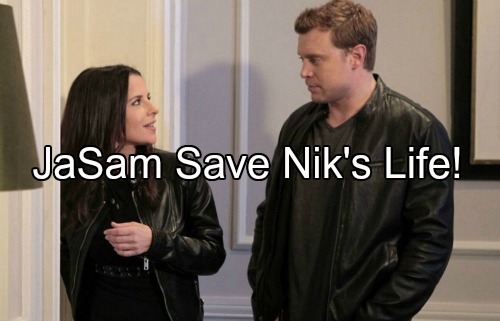 This week, Ava will demand that Huxley explain why he’s kidnapped her and the Cassadine prince. Once Huxley admits that he wants something Ava has in her possession – a statue that he thinks belongs to the venerable Huxley family, things get worse.

Ava is greedy and won’t hand it over. Plus, she’s not a woman who gives in to threats idly. Huxley doesn’t seem like a dangerous dude so Ava may think she can defeat him easily. But beneath that bow tie and proper exterior may lurk a killer.

After Ava refuses to hand over the antiquity, Huxley will go and rifle the contents of Ava’s hotel room looking for the statue or a hint to where she’s hidden it. Interestingly, Sam and Jason will also search the room of Nikolas’ mystery “female companion.”

They have no idea what to expect when they break into the room, so when they discover travel documents in a woman’s handbag and see Ava’s name, they will be floored. Both Jason and Sam know that Ava can be a dangerous character.

General Hospital spoilers reveal that Jason and Sam may assume that Ava has taken Nikolas for some nefarious reason rather than realizing both Ava and Nikolas could be in danger. Sam and Jason see this now as a rescue mission.

JaSam was chasing Nik to bring him back to Port Charles to clear Jason’s name, but now it’s a race because if Ava finishes Nikolas off, they won’t be able to prove Jason’s innocence. Sam and Jason are misreading the clues, though.

Sam and Jason will initially have no idea that a third party is at play because they’re focused solely on the Port Chuck people they know – Ava and Nikolas. Might Sam and Jason be in danger as well? While all this goes down, Nik and Ava will languish at the Huxley estate.

They’re in captivity and on lock-down and neither will like it very much. Ava has things to do, Nikolas wants to go meet Spencer Cassadine (Nicolas Bechtel) and both are annoyed that the British dandy is holding them hostage for a statue.

Turns out that Huxley might have a legitimate bone to pick with Ava even though he’s going about this the wrong way. General Hospital spoilers reveal that the artifact was stolen so that means Ava might have purchased it on the black market.

This leaves us with some big questions. Will Ava hand over the item to save herself and Nikolas? Will she put Nikolas’ life at risk by refusing to cooperate? Can Sam and Jason get to Nik and Ava before Huxley harms them?

Will Nikolas and Ava find a way to escape their captivity? Or could traitorous Ava escape but leave Nikolas behind? General Hospital spoilers tease that by the end of the week, Ava will face more danger and will do something that horrifies even her.

What could Ava do that horrifies herself? She’s a cold-blooded killer, so it has to be something pretty bad – will Ava kill Huxley? Will she abandon Nikolas and save herself?

Share your comments below on the Ava and Nikolas adventure with Huxley while Sam and Jason chase them down! Be sure to check back with CDL often for more General Hospital spoilers and news.