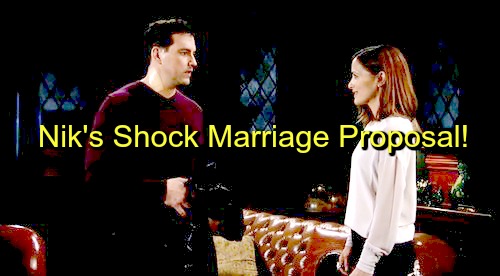 “General Hospital” (GH) spoilers indicate that Nikolas Cassadine (Tyler Christopher) will shock Hayden Barnes (Rebecca Budig) when he proposes to her off the cuff. Hayden already tried twice now to get Nik to agree to marry her telling him it’s the best way to shield his ELQ stock and assets from the lawsuit.

Nikolas has told her twice he doesn’t want anything romantic with them to be about the business. But Nikolas has a major change of heart after Jordan Ashford (Vinessa Antoine) tells him that the charges against Jason Morgan (Billy Miller) were dropped thanks to eyewitness statements.

You’ll recall that Nikolas told Hayden that he may lose everything – but doesn’t want to lose her. We saw him finally declare his love for her. Then today, Nikolas will go one step further and will officially propose to Hayden, but ensures her it’s not about the lawsuit – it’s not about ELQ.

Nikolas will tell her none of it means anything without her. He’s all in. The problem is, Hayden wants to be all in as well – but she’s got Tracy Quartermaine (Jane Elliot) on her back blackmailing her. Nikolas proposing will give her the goods to deliver to Tracy and end the blackmail.

But that also means she’ll lose Nikolas in the process once he finds out what she’s done. Hayden has fallen hard for Nikolas and wants to be with him. She’ll try and slow him up on the proposal but Nikolas will press harder and Hayden will finally say yes.

Not only does she love Nikolas but she adores Spencer Cassadine (Nicolas Bechtel) and the idea of the little family they can be together. But once they’re officially engaged, Hayden’s conscience will eat at her and she’ll consider telling Nikolas she’s changed her mind.

By the first week of February, though, we’ll see Nikolas and Hayden in Vegas for a quickie wedding as part of sweeps. A GH script for early February episodes, leaked by Ryan Paevey on Instagram, reveal a Las Vegas setting, a Justice of the Peace, and Hayden – so this will get real serious, real fast.

Whether Nikolas and Hayden make it to their I do’s and the “man and wife” stage is still up in the air and Hayden herself may be wavering up until the last minute. Hayden’s secret past is looming and threatens to blow up her relationship with Nikolas – and Tracy has made it clear she’ll tell Nik who she is.

Curtis (Donnell Turner) seems to have some lingering interest in Hayden as well. When looking into her thwarted killing, did Curtis also look into her past? He’s also on the cast list for the Las Vegas wedding episode and could be a factor in whether Nik and Hayden get hitched or not.

Hayden is about to get everything she wants while Nikolas stands to lose everything he’s got. Can Hayden go through with this? Will she devastate her prince and risk losing him to keep her shameful secrets buried?

Stay tuned to GH to see Nikolas put a ring on it and come back to CDL for more “General Hospital” spoilers and news on Hayden, Nik and all the hot storylines.