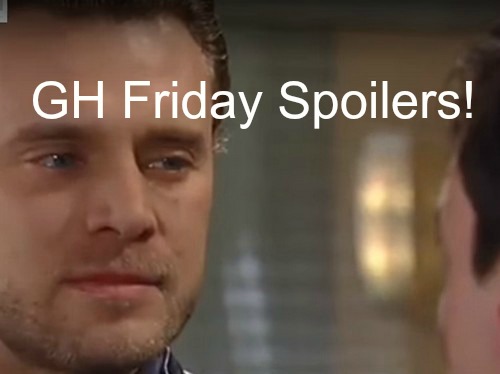 “General Hospital” (GH) spoilers reveal that Friday, January 8 is all about blackmail, secrets and revenge. Check out these spoilers for cliffhanger Friday – Jason is in the hot seat – Hayden’s past revealed – Lulu’s revenge plan against Valerie kicks off.

Over at the PCPD, Valerie Spencer (Brytni Sarpi) is in deep doo-doo. She goes bawling to Dante Falconeri (Dominic Zamprogna) about her work woes and he’ll try to comfort her. Did Johnny Zacchara (Brandon Barash) send the pics of money changing hands to the police chief?

Or did he just call in a nasty rumor that Valerie is on the take? Either way, it looks like Valerie’s career as a cop is on the line. GH spoilers indicate that Paul Hornsby (Richard Burgi) will soon make Val’s life at the PCPD a nightmare.

Lulu Spencer (Emme Rylan) notices that Johnny is being cagey and she soon has reason to suspect there’s more to him being back in Port Charles than just her caper. Did Johnny come back to win Lulu from Dante and for some other mob-related nefarious purposes?

Dillon Quartermaine (Robert Palmer Watkins) puts his foot in his mouth and lets slip that Lulu has a man stashed away at the Haunted Star and Maxie Jones (Kirsten Storms) jumps on that like a cat on a mouse. Can Dillon backtrack and cover his admission – or will Maxie browbeat him into the truth?

Maxie wouldn’t turn in Johnny anyway since he’s her pal, but Dillon doesn’t know that tidbit. Will Maxie go confront Lulu about her revenge romance? Will Lulu admit Johnny is lurking? Nathan West (Ryan Paevey) will be back soon and may be looking for Johnny.

Tracy Quartermaine (Jane Elliot) has been looking into the background of her conspirator Hayden Barnes (Rebecca Budig) and knows who Hayden is and shocking secrets from her past. Tracy threatens to spill the beans unless Hayden steps up her efforts to manipulate Nikolas Cassadine (Tyler Christopher).

Hayden pushes back and Tracy will have to reveal what she knows to convince Hayden to comply. At the same time, Nikolas is blackmailing Jason Morgan (Billy Miller) into letting Nikolas keep his voting shares of ELQ. It’s either that or Nikolas tells the cops Jason intentionally threw him off the balcony.

Looks like Jason will have no choice but to cave to his nemesis, but he will hate giving Nikolas what he wants – and will soon look for a way out from under the yoke. Curtis (Donnell Turner) will soon make a money demand of Hayden – he wants paid!

And Hayden will also get confirmation that Nikolas hired the shooter that took aim at her head. Hayden will shock Nikolas with a confession – but is it about her investigating her shooting – or will she come clean about her past so Tracy can’t blackmail her?

Liz Webber (Rebecca Herbst) is home alone when she hears scary sounds. Is it Jake Spencer (James Nigbor) doing something to scare her into calling his dad to come to the rescue? Or is someone really lurking outside Liz’s house?

Liz will talk to Laura Spencer (Genie Francis) about her Jake soon – Laura is a good person to talk this out with since she was held captive by a Cassadine before. She’s been there, done that. Will Franco (Roger Howarth) chat with Liz soon about Jake’s disturbed doodling?

All this and more on cliffhanger Friday – don’t miss the January 8 episode then come back to CDL for tons more “General Hospital” spoilers and updates.