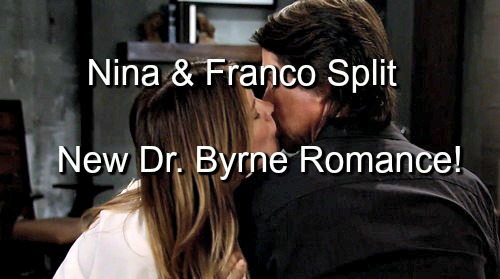 Nina has made it clear that she wants a family and is determined to start one ASAP. However, Franco keeps making one excuse after another to shut this down. Franco told her that adoption would never work because of their sordid pasts.

That was confirmed on a GH episode recently when an adoption agency rejected Nina – and Franco was irritated since Nina applied without telling him. And now, Maxie Jones (Kirsten Storms) told Nina to get her fertility checked to try and have a baby of her own.

It was Britt Westbourne (Kelly Thiebaud) that told Nina she was infertile – but Britt is usually in league with her mother Liesl Obrecht (Kathleen Gati) who’s the sister of Nina’s evil mom Madeline Reeves (Donna Mills) so that could have been a lie.

General Hospital spoilers ask if Nina will get confirmation of her fertility and try to get pregnant without talking it through with Franco? No doubt he’ll be angry if she does. Plus, GH spoilers reveal that Nina will soon confront Franco about his attention to other women’s children.

Nina is aggravated by how supportive Franco has been to Ava Jerome (Maura West) as she sees Kiki Jerome (Hayley Erin) through her crisis – and also helping Liz Webber (Rebecca Herbst) as she deals with Jake Spencer (James Nigbor).

GH spoilers hint that Nina sees this as hypocritical – hanging with them and their kids and playing dad while denying her the chance to be a mom. It seems like GH writers are spoiling to split FraNina. There’s a few reasons they might be doing this and one of them could be Michael Easton’s return to the show.

First, FraNina are a super cute couple, but they may not be a ratings draw now that neither is insane. Second, Franco and Liz seem to be on the road to being a couple – assuming Becky Herbst is not leaving the show. Third, is Michael Easton.

You know that Nina loved Silas Clay (Michael Easton) dearly and was devastated by his death. Although Marcus Byrne is not Silas, he’s still a doc with the same face. Are the writers clearing the way to pair Nina with Marcus as a sort of homage to Nina and Silas?

What do you think GH fans? Are you hardcore shipping Nina and Franco or would you like to see them split and part of new couples? Are you a fan of Friz? Do you think Nina and Marcus would be a great new couple?

Share your comments below and come back to CDL for more “General Hospital” spoilers and news.