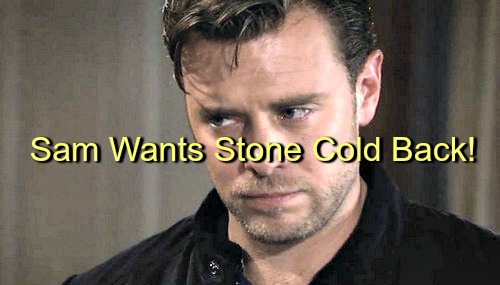 “General Hospital” (GH) spoilers reveal in episodes this week and next week that Sam Morgan (Kelly Monaco) will soon make an admission that the scary and dangerous side of Jason Morgan (Billy Miller) is a major part of the attraction. Is it to Jason himself that she makes this statement? We’ll soon see…

General Hospital spoilers ask the question now that Jason has turned into a suburban dad – with only occasional fits of killing rage – is that enough to satisfy Sam’s adrenaline junky needs? While Jason may be turning towards Sam now and things are heating up, is Liz Webber (Rebecca Herbst) who is totally domesticated and against all violence on Jason’s part the better woman for him?

Carly Corinthos (Laura Wright) made a big deal of accusing Liz of trying to “domesticate” Jason and wanting him to be a stay-at-home dad and making him boring. Of course, it was Jason himself that was interested in being a family man, but the accusation was out there.

On the flip side, Sam is all about adventure. She’s always ready to risk life and limb – perhaps a bit too ready – particularly since she’s a mom now. The big question is, can Sam live without the danger? Will she love new Jason like she did old Jason?

Of course, the chemistry is still there. No doubt they are still compatible in the sack, but what about in everyday life? Will Sam be content watching Jason carpool the kids to school and be a soccer dad? Sam will soon confess to being a danger junkie and liking the Stone Cold side of Jason.

GH spoilers ponder how Jason will handle this revelation that Sam prefers Stone Cold to the more balanced new Jason? Will he tell her that unless it comes to self-defense, he’s done with danger? Jason hates the lives he’s taken and he hasn’t even recovered all his memories to know just how many more dead bodies lie in his wake.

Even if Sam and Jason commit to being together and living an average life, will Sam be content with that in the long run? There are those that may say that’s exactly what she was doing with Patrick Drake (Jason Thompson), but you’ll recall she was breaking into Wyndemere with Jake Doe at the same time.

Sam has always had that element of danger about her. Can she be happy without it? Can Jason live a quiet life once he recovers his memories? General Hospital spoilers ask if Sam might push Jason more in the Stone Cold direction and actually be a grave risk to his survival and wellbeing. Is Liz’s relative domesticity and normal mom-life a much safer and better match for new Jason than he realizes?

Even Liason fans have to see that Liz and Jason are dead for now, but that doesn’t mean they are dead for good. With this revelation from Sam that the dark side of Jason is what does it for her, she and Jason may have to have a serious talk about their future.

It’s all hormones and rediscovery right now, but could there be discontent for JaSam down the road? Is Sam’s admission foreshadowing future problems? What do you think GH fans, can Sam be just a wife and mom or will she miss Stone Cold too much?

Will Sam see settling down with Jason as just plain settling? Share your comments below and come back to CDL often for more “General Hospital” spoilers.