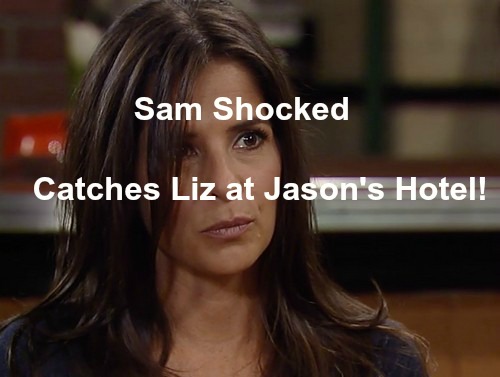 “General Hospital” (GH) spoilers reveal that Sam Morgan (Kelly Monaco) is due for a rude awakening soon when she finds Liz Webber (Rebecca Herbst) in Jason Morgan’s (Billy Miller) MetroCourt hotel suite. How will Sam react? Are she and Liz brewing another cat fight?

Here’s how it all goes down… Jason stopped by to check on Liz and the boys and finds her front door open – and Liz discovers a family photo shattered. Soon Liz will realize their son Jake Spencer (James Nigbor) is missing and goes into a panic.

She’s worried that something happened to Jake but no doubt Jason and Liz will find him soon. But then both are worried that this may be related to the person Jake saw at their window on New Year’s Eve. Because it’s not clear what’s going on and Jason is concerned, he insists they come with him.

Liz and Jason will wonder if this is related to the Cassadines or perhaps a mob enemy of Jason’s. Liz will insist she and the kids could stay home but Jason doesn’t want to take any chances and insists until Liz accepts the offer and the family heads to the MetroCourt for the night.

So in fact, the encounter is innocent, but Sam may assume the worst. Will Liz tell Sam it was a platonic sleep-over or let Sam draw her own conclusions? There’s an interesting dynamic going on here. Liz assumes that Sam is about to get Jason back.

Sam is also feeling confident since she and Jason just had a coffee date and she’ll soon tell her mom Alexis Davis (Nancy Lee Grahn) that things are looking up and she’s optimistic about them rebooting their love. Then BAM – Sam finds Liz in Jason’s hotel room.

If Sam sees the kids too, she might feel comforted, but if it’s just Liz that answers the door, that’s another thing. Also if Liz is in a robe or towel, that will make it worse. Will Liz be forthright and tell Sam it was a safety concern that triggered the sleepover?

Or will she let Sam think she and Jason were engaged in hanky panky? When Sam does hear about the safety issues, will she assume Liz is the one who is pulling these stunts to weasel her way back into Jason’s life?

No one in Port Charles – with the exception of Laura Spencer (Genie Francis) and Nikolas Cassadine (Tyler Christopher) – will give Liz the benefit of the doubt for a while. Sam will likely assume Liz is behind this and it’s another scheme to keep Jason – just like the Jake identity lie.

What weighs in Liz‘s favor in this is that Jason can vouch that he was with Liz when Jake went missing and saw her legitimate panic. Then again, Sam may remind Jason that Liz also faked emotion at his identity reveal and could be faking this too.

But even if Jason calls into question Liz’s involvement in the incident at her house, all of that will be put to rest soon when it’s revealed that little Jake is the perpetrator and he’s far more disturbed than anyone realized.

There’s a lot of emotion swirling around Jake about Liz’s house – likely since his dad Jason moved out. Jake just sketched some pretty scary things on the drawing pad Franco (Roger Howarth) gave him – is that a sign of the behavior his parents are seeing manifested in this incident?

What do you think GH fans? Is little Jake the culprit behind the incident at the Webber house? Or is there some other force at play here? Share your thoughts in the comments below and be sure to check back with CDL often for more “General Hospital” spoilers and news.