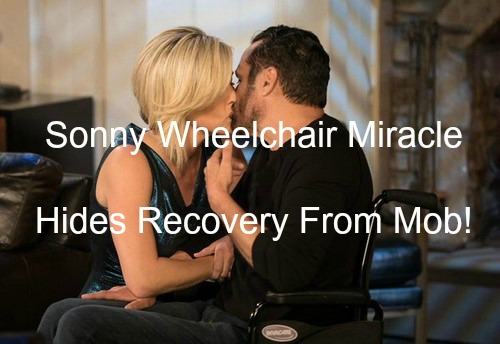 “General Hospital” (GH) spoilers reveal that nothing can keep down the Teflon Don and Sonny Corinthos (Maurice Benard) will be back on his feet soon – but he doesn’t want anyone to know. Sonny will only let Carly Corinthos (Laura Wright) and maybe Jason Morgan (Billy Miller) in on the secret of his recovery.

Shouldn’t Sonny be dancing through the streets of Port Charles celebrating that he’s beaten the paralysis? Nah. Sonny is way too devious for that. He’s going to use his recovery to turn the tables on his enemies and strike when their guard is down.

Right now, Sonny has just realized he has feeling back in one leg and can wiggle it. He and Carly will celebrate his miracle comeback and Carly will want to crow it from the rooftops. But Sonny will talk her out of making any big announcements, once his scheming senses take over.

Sonny is great at leveraging things to his advantage and he will quickly begin to see that he can turn the wheelchair into a secret weapon against Ava Jerome (Maura West). Ava has taken great pleasure in telling Sonny he’s not a man while he’s in that chair, so he wants to hit her back extra hard.

When Sonny thought he was facing life in the chair, he was frustrated and bitter and didn’t want to be seen out and about in it. But now that he knows he’s recovering, Sonny may flaunt himself around town in the chair to give off the appearance that he’s resigned himself to being stuck in the chair.

That will give Ava and her partner in crime Paul Hornsby (Richard Burgi) a false sense of confidence that Sonny is weak and ripe for a mob takeover. After all, Paul has those gun shipments being brought into Port Charles and we know those aren’t for a floral convention.

Paul and Ava will gear up for their big mob move thinking Sonny is out of commission and bound to the wheelchair. However, things are not going to work out for Sonny as he hopes. If Sonny was just working against Ava, then his plan to leap out of the wheelchair and shout “aha, fooled you!” might work.

The fact is, Sonny has no idea all of the forces at play against him. He knows there’s a gun runner in town and may think Ava is just using Port Charles as a trading point to buy and sell guns. Sonny has no idea those guns are being imported as arms in a mob war being planned against him.

Sonny also thinks that his opposing force is simply Ava as head of the Jerome crime family. He has no clue that Paul is in the mix – plus Paul has someone that he’s answering to that we haven’t seen yet. He could be working with the Alcazars, some Russian mob boss, a Cassadine… who knows?

The point is, Sonny sees a fin in the water and thinks Ava is the only shark circling. In reality, there is much more trouble lurking beneath the depths and Sonny may find himself quickly in over his head. What’s more, he’s operating at a deficit because Jason will not be at his side.

New Jason has a distinct distaste for mob life and doesn’t like that he was besties with a mob boss. Don’t look for Jason to sign back on to Sonny’s crew. In the recent past, when Jason has helped him out, it’s just because he was in the right place at the right time and his killer instincts kicked in.

Jason will not voluntarily sign on to help Sonny win a Port Charles turf war. He will choose corporate plotting over mob shenanigans in coming weeks, much to the delight of the Quartermaines – and much to the disappointment of Sonny and Carly.

Still, don’t be surprised if a reluctant Jason is pulled right into the middle of the coming mob war (think February Sweeps which are less than one month away), despite his current distaste for crime and violence.

This will all come out in a major plot blow up. Sonny’s enemies will figure out he’s not weak – as they falsely assumed he was – and Sonny will figure out his enemies extend far beyond Ava. This will be a two-way shocker for both sides of this conflict and will change the whole playing field.

Don’t miss a moment of the action when Sonny and his enemies go to war – each underestimating the other – and the explosive outcome. And check back with CDL often for more “General Hospital” spoilers, news and updates.