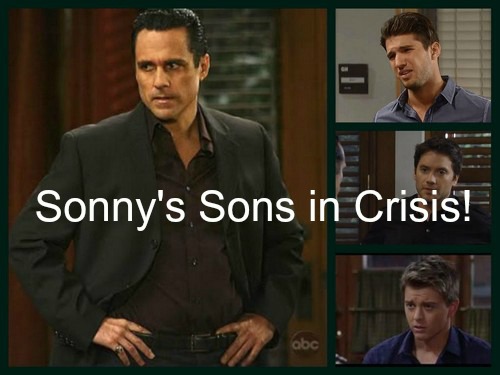 “General Hospital” (GH) spoilers tease that Sonny Corinthos (Maurice Benard) will be dealing with one crisis after another when it comes to his three sons. Can he juggle them without neglecting one or more of them? And as Sonny tries to help them, will his favoritism begin to show?

What do you think GH fans, who is Sonny’s favorite son and will that affect how he prioritizes his time in coming weeks? Is it Morgan Corinthos (Bryan Craig), Michael Quartermaine (Chad Duell) or Dante Falconeri (Dominic Zamprogna) that tugs most at Sonny’s heartstrings?

Morgan is clearly the highest-maintenance, most troubled kid of all. Not only is Morgan constantly in trouble, but he is jealous of Sonny’s relationship with Michael. Morgan thinks Sonny sees Michael as the golden child and he’s not wrong – despite that Mikey was adopted.

Morgan was angry when Michael turned his back on Sonny and took baby Avery away, that his dad still wanted to make peace with Michael, still loved him, and defended him to everyone. Morgan sees this as unfair and gross favoritism.

Of course, in hindsight, we know that Morgan was in the throes of an impending bipolar crisis when all of that went down and part of his anger can be attributed to his mental health issues. But Morgan has been bitter about Michael for years.

Michael was raised in Sonny’s image and has a temper much like his adoptive father. It is their similarities that have brought them closer as father and son. But now that Morgan has been diagnosed with bipolar, Sonny may actually grow closer to his youngest son.

Why? First, Sonny feels at fault that Morgan has this disorder. Second, Sonny has been down the road that Morgan is just starting and will want to be there to help him since he alone knows precisely what Morgan is going through. This could change their relationship significantly.

Plus, Michael may have hit a sore spot with Sonny on two counts recently. First, he’s rejecting Sabrina Santiago (Teresa Castillo) for carrying a child that’s not his. Sonny raised Michael like he was his own and thinks Mikey should step up and do the same.

Sonny could see it as disrespecting his legacy as Michael’s father. Second, Sonny doesn’t know yet that Carlos Rivera (Jeffrey Vincent Parise) is the baby daddy. If Michael does reconcile with Sabrina and then breaks the hitman baby news to Sonny, will Sonny regret encouraging him?

And if Michael continues to push Sabrina away, will Sonny see this as a betrayal of how he raised him? This could move Michael lower down the totem pole of Sonny’s offspring. When it comes to Dante, he’s disappointing his dad right now by cheating on Lulu Spencer (Emme Rylan).

Sonny has continually prodded Dante to go back to Lulu and make things better. As Sonny admitted, he knows all about doing women wrong then getting them to take you back. Plus, Sonny and Dante have a rougher history than the other two – he’s the only one of his kids that Sonny has personally shot.

But also operating in Dante’s favor is that he’s the only one of the three to provide Sonny with a grandchild. However, we don’t see as deep a bond between Dante and Sonny that we do between Sonny and the other two boys.

That’s all down to Olivia Falconeri (Lisa LoCicero) keeping Dante away from Sonny the entire time he was growing up – which also led to the aforementioned shooting. So what’s the verdict? Who is Sonny’s favorite? Who is the best of them?

On the surface, Dante seems like the clearest choice – despite his recent cheating – for being the best and most responsible of the three. Michael, though, has proven himself to be a real Corinthos. But those two don’t need Sonny the way that Morgan does right now – and that’s the big deal.

Morgan, despite his trouble – or because of it – will dominate Sonny’s attention for the foreseeable future – supplanting Michael as the reigning favorite. And poor Dante continues to come in third. But all three of the boys should realize that they don’t stand a chance next to baby Avery…

What do you think GH fans, who do you think is the best of Sonny’s boys? Who is your favorite? Share your thoughts in the comments below and come back to CDL often for more “General Hospital” spoilers and news.