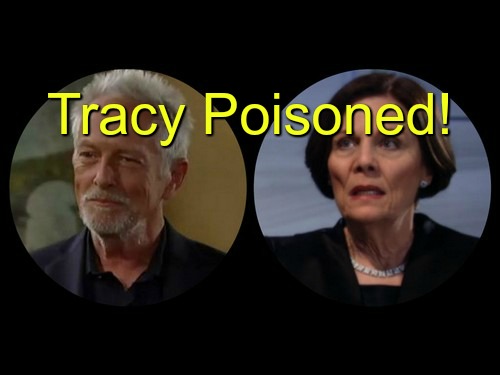 “General Hospital” (GH) spoilers tease that Tracy Quartermaine’s (Jane Elliot) run in with Larry Ashton (Hugo Napier) may have been no unhappy accident, but a deliberate plot. Ever since Tracy’s return from her spa visit, she’s been sick and suffering what looks like mini-strokes. Did Ashton do something to her?

Did Larry Ashton poison Tracy? Did he go to that spa specifically to look for her? And is Ashton tied into Hayden Barnes (Rebecca Budig)? Could Ashton be part of Hayden’s past as Rachel? And did Ashton target Tracy to try and help Hayden out?

Third, ever since Tracy got back, she’s been suffering neurological symptoms that were not present before she left or while on vacation. What happened to Tracy to trigger these medical issues? Look no further than Larry Ashton’s past to get the answers.

Back in Ashton’s cartel days with Cesar Faison (Anders Hove), he had a reputation for toying with poison – specifically carbon disulfide. Unlike other GH plots with mystery science, this one is a real thing and the substance causes neurological problems including symptoms that look like Parkinson’s.

It can kill you in large doses and in smaller quantities can cause dizziness, anxiety, psychosis and a host of other brain issues. Doesn’t that sound like what Tracy is going through? But why would Ashton show up out of the blue and poison Tracy?

Could it be that he’s Hayden’s father that she refuses to speak of? Tracy told Dillon Quartermaine (Robert P Watkins) that Hayden’s father is an “acquaintance” of hers and Ashton would certainly qualify as that. She hates her former baby daddy, so she would probably categorize him at a distance.

Ashton claimed he was down at the spa because he turned over a new leaf. That doesn’t sound like Ashton at all. But if he knew that Tracy was blackmailing his daughter (assuming Hayden/Rachel is his kid), he might poison Tracy to protect his kid despite his past affection for her.

Ashton could have easily slipped something into her drink after he got her high – we saw that she was giggly and inattentive for a while and constantly sipping from a fruity beverage. Ashton could have given her enough poison to kill her – or just to mess with her mind – when she wasn’t looking.

If Tracy can’t keep it together, she might be found incompetent to take back ELQ. Or he may have intended to flat out kill her. Who knows? Ashton’s involvement in Tracy’s health crisis would explain Tracy’s symptoms and why he was brought back for a single episode.

Perhaps we’ll be seeing him again if he is the father of troublesome Rachel/Hayden and it would certainly explain why Hayden doesn’t want Nikolas Cassadine (Tyler Christopher) to know her past and how she developed her con artist skills.

What do you think GH fans? Could Ashton have poisoned Tracy on her relaxing spa vacation? Is Ashton Hayden’s mystery father she doesn’t want to talk about? If Ashton did poison her, do you think Hayden knew or he did it on his own to try and benefit his estranged daughter?