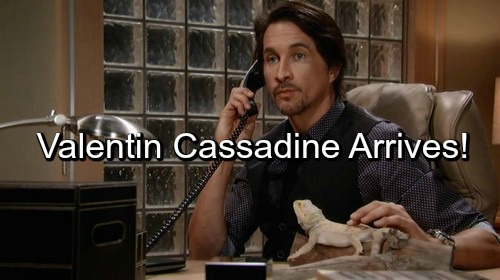 “General Hospital” (GH) spoilers tease that Dr Hamilton Finn (Michael Easton) may, in fact, be a closet Cassadine and he could be the worst of them all – Valentin. Several storylines have hinted that Valentin would come to town and Easton’s new character introduction was laden with subtext.

First, Dr Finn was seen stroking a lizard. Many uber-villains stroke kitties – Dr Evil style – but since the Cassadines are notoriously cold-blooded, a reptile makes much more sense. Plus, the lizard Hamilton was petting was a bearded dragon.

The scientific name of bearded dragons – the genus – is pogona – which is Greek for beard. The Cassadines are Greek – and a beard is a disguise. Was this just a casual choice of reptile? General Hospital spoilers ask if there is a hidden meaning in all this for viewers?

Plus, when Monica Quartermaine (Leslie Charleson) mentioned to Dr Finn that they met at a WHO (World Health Organization) conference, he said he remembered and that it was on “the effects of carbonic snow on arterial function” and called it years ahead of its time.

For those with their GH history books out, carbonic snow was the substance that Mikos Cassadine’s weather machine generated that could have frozen Port Charles. Of course, Mikos was thwarted but why bring up Cassadine science from way back in the day at random?

This was another hint that he’s a Cassadine… But why not Stefan or Stavros – why do we theorize that it’s Valentin? Well first, Stefan and Stavros have both come and gone, lived and died. Plus, they have firm character histories.

Valentin, however, is a clean slate. We know nothing about him so it’s totally plausible that he’s been going by another name all these years and working in the sciences. And Helena Cassadine (Constance Towers) said that Valentin hated both Spencers and Cassadines.

He would be an interesting character to bring into the mix since he would be a “big bad” for two legacy families – and Dr Finn is supposed to be “hell bent on revenge.” After all, the Spencers killed off Stefan and Stavros supposedly died in the lab accident and that’s to blame on Helena.

We’ve also got the Easter eggs dropped prior to the will reading where Nikolas Cassadine (Tyler Christopher) said a couple of times that the eldest male Cassadine inherits. That teased that Nik would NOT turn out to be eldest – which means we need an older male Cassadine to come out.

Easton certainly fits the bill of a Greek villain with his dark good looks. And, let’s face it, after Silas Clay’s mushy niceness, GH fans would like to see Easton playing with some edge. Plus, if Easton is Valentin, that loops Nathan West (Ryan Paevey) into the story since that’s likely his dad.

And Easton and Paevey do bear enough resemblance to pass for family. That would also tie in Nina Clay (Michelle Stafford), Liesl Obrecht (Kathleen Gati), Franco (Roger Howarth), the Spencers, the Cassadines, the Quartermaines, and all the doctors and nurses at GH.

The new GH writers promised us an overarching storyline that would involve most of Port Charles. Could Dr Hamilton Finn be the catalyst for that all-encompassing plot? Fingers crossed… After all, Port Chuck doesn’t need an infectious disease specialist on call, but they do need a new super villain!

Share your comments below on who you think Dr Hamilton Finn really is and what your hopes are for Easton’s new character. And come back to CDL often for more “General Hospital” spoilers and news.