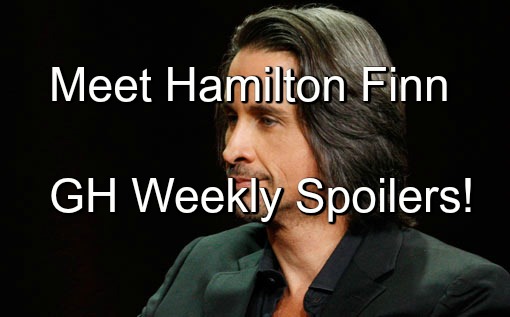 At GH, Tracy Quartermaine (Jane Elliot) is all doom and gloom while she awaits her test results. Monica Quartermaine (Leslie Charleson) is trying to take care of her but Tracy is sure the Grim Reaper is coming for her.

Tracy has Dillon Quartermaine (Robert P Watkins) concerned, so he calls his brother Ned Ashton (Wally Kurth) to catch him up and tells him to come home. Meanwhile, General Hospital spoilers tease that Tracy’s test results are back and it’s good news, but a doctor disagreement is brewing.

Looks like Tracy will be back on her feet soon enough and making trouble for Nikolas Cassadine (Tyler Christopher) over ELQ.

Dr Griffin Munro (Matt Cohen) gets his new buddy Brad Cooper (Perry Shan) to give him access to Tracy’s test and Dr Doom confronts Griffin for going behind his back to check on his patient yet again.

Where does Hamilton Finn (Michael Easton) fit into all of this? We’re excited Easton is back and can’t wait to see how Hamilton fits into the canvas at GH.

Nina Clay (Michelle Stafford) also has a GH visit scheduled – she has to see Dr Kelly Lee (Minae Noji) about whether or not she can have kids. Did Britt Westbourne (Kelly Thiebaud) lie to Nina? Is Nina able to conceive and carry a child?

GH Spoilers say that Nina and Maxie Jones (Kirsten Storms) deal with more chaos at Crimson as the cops show up. Later, Nina hires Curtis Ashford (Donnell Turner) to find out who’s sabotaging the mag – of course that leads back to her boss Julian Jerome (William deVry)!

Sonny Corinthos (Maurice Benard) sent Max Giambetti (Derk Cheetwood) back to Wesleyan to research the professor who did his little girl dirty. He wants him to find “the guy.” How long will it take Max to figure out it’s not a guy at all and there are more issues to deal with?

Sonny tries to be a good dad to Kristina Corinthos (Lexi Ainsworth) but GH spoilers say he may be in over his head soon. Sonny steps up for Ava Jerome (Maura West) and Kiki Jerome (Hayley Erin) but he is up to no good and plotting to do Ava dirty.

To make things worse, Liz Webber (Rebecca Herbst) is poking around Wyndemere and comes upon Hayden muttering about Naomi and it looks like Hayden herself might spill the truth for Liz to hear. Liz confronts Hayden who fights back in a dirty way.

Hayden tells Liz that she’s trying to ruin her marriage to Nikolas so she can get him back now that Jason Morgan (Billy Miller) dumped her. Hayden is desperate to get Liz off the subject but it’s doubtful it will work. Hayden’s days are numbered now that Liz knows her secret.

She pulls in Lulu Spencer (Emme Rylan) to help figure out the key. They poke around Wyndemere and finally get a lead. Looks like the key is to a trunk that played in a long ago storyline in Laura’s past. That leads Laura to the door of Scotty Baldwin (Kin Shriner).

Anna Devane (Finola Hughes) has a talk with Griffin that has her wondering if he’s been completely honest with her and she questions his motives. However, later she thinks better of it and decides she’s being unreasonable. But is she?

Also, the Mayor Lomax (Shari Belafonte) trial should die a quick death once Carly Corinthos (Laura Wright) gets involved. She’s furious that the mean mayor shut down the MetroCourt and when Alexis Davis (Nancy Lee Grahn) encourages Carly to stand with them she does and that gives them a victory.

The week of Monday, March 21 through Friday, March 25 will be busy in Port Charles. Watch every day and be sure to check back with CDL for detailed daily “General Hospital” spoilers and news.