General Hospital Spoilers: Who Is More Evil, Helena Cassadine or Ava Jerome – Vote In Our Poll 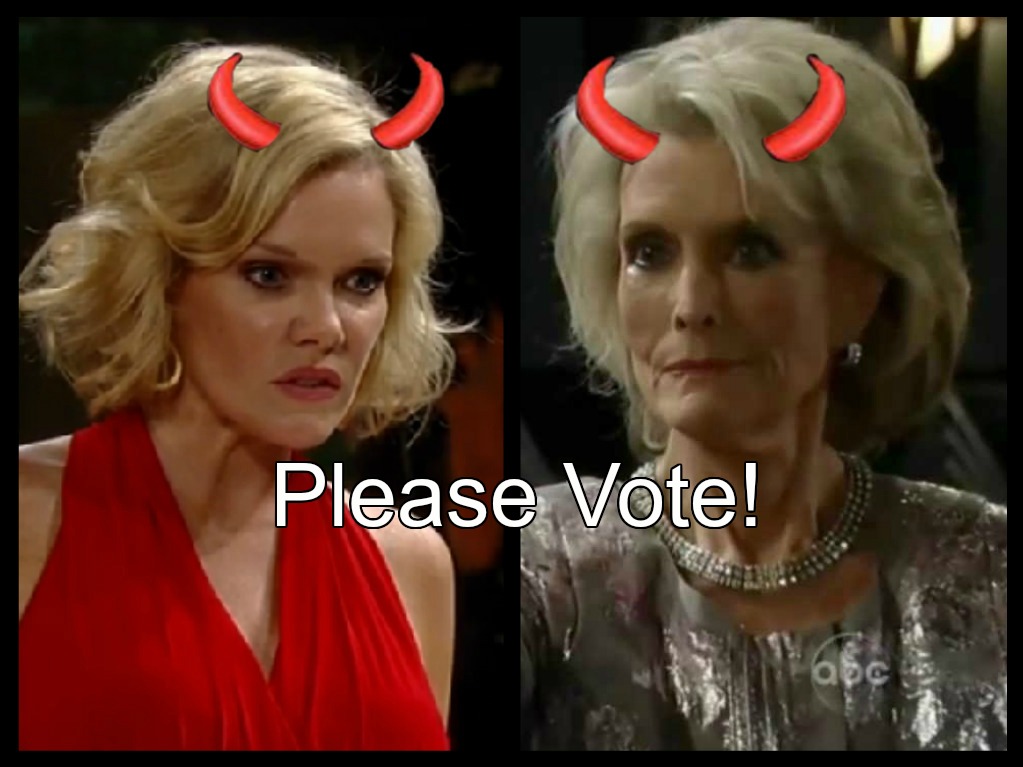 General Hospital (GH) spoilers remind is that Port Charles has had its fair share of evil through the years, most of it coming from the mobsters fighting over turf including the Corinthos organization, the Zacchara Family, the Alcazar family and now the Jerome family.

Through the years GH fans have seen a few women who rose to power, like Faith Roscoe (Cynthia Preston), and Claudia Zacchara (Sarah Joy Brown), but none of them compared to Ava Jerome (Maura West) and Helena Cassadine (Constance Towers).

Let us compare these two evil women, Ava and Helena, and you can decide who you think was the biggest female villain to ever set foot in General Hospital’s Port Charles!

Elizabeth Taylor appeared for the first time on General Hospital in 1981, as Helena Cassadine, the vengeful widow of Mikkos Cassadine (John Colicos) who had died the summer of 1981 during the “Ice Princess” storyline. Luke Spencer (Anthony Geary), Robert Scorpio (Tristan Rogers) and Laura Webber (Genie Francis) were the ones who ultimately cause Mikkos’ death, which is what brought Helena to Port Charles from November 10 through November 19. She was around long enough to place a curse on Luke and Laura’s wedding.

In 1982, Laura vanishes, it turns out that Helena had kidnapped her and forced her to marry her son Stavros (then John Martinuzzi), who was obsessed with her. Laura finds out that Luke is alive and she reunites with him in Port Charles, not before Stavros was “killed” by Luke.

In 1984, General Hospital’s supercouple Luke and Laura (L&L) learn she is pregnant and decide to leave town; 9 years later, L&L return to town with their son Lucky. A year later their daughter Lulu is born. When Lulu is 2-years-old, she is diagnosed with aplastic anemia, and Laura is forced to reveal that her donor is Laura and Starvos’ son, Nikolas Cassadine.

General Hospital’s Helena Cassadine has done some dastardly things. She slit the throat of her husband’s mistress right in front of their little girl, Alexis Davis. She switched DNA tests of her own grandson, Nikolas when it suited her plans. She tried to kill her own son, Stefan because she viewed his love and compassion as “weak”.

In May 1999, Helena kidnaps and brainwashes Lucky Spencer (Jonathan Jackson), making everyone believe he died in a fire. He reappears in Port Charles in 2000, but before he could do too much damage he was able to break free of Helena’s control. At the same time, we learn that Stavros is not really dead, he is in a frozen state, waiting for science to figure out how to revive him. Luke kills Stavros again in 2001, throwing him down a pit.

In 2006, Helena hired someone to kidnap Nikolas’ (Tyler Christopher) son, Spencer. Nikolas and Emily Quartermaine (Natalia Livingston) trail the nanny to Russia, where they find Spencer with Helena. Emily trades herself for the baby, but she manages to escape before Helena could harm her. Later Emily dies and Helena tries to use her lookalike, Rebecca Shaw to seduce Nikolas.

In September 2009, Helena returns to Port Charles but she is bedridden. Luke comes to see her, she reveals that there is another Cassadine (Valentin)who is after both the Spencers and the Cassadines; a man that even she is afraid of; Nikolas has her sent back to a hospital in Greece for her own safety.

A year later she returns when she learns that Elizabeth Webber (Rebecca Herbst) is pregnant. Again, she tampers with DNA tests and wants Nikolas to believe that Aiden is his son. Liz has another test done and it is revealed that Aiden is Lucky’s son, but the truth is delayed after Liz’s son, Jake dies from a hit and run.

Later it was discovered that Jake was alive and living on Cassadine Island. Not everything had been revealed yet, but you can be sure it will be explosive when revealed. Jason ends up shot and pushed off the docks into the icy water, eventually everyone presumed he was dead, but he returned 2 years later, after being “conditioned” by Helena and no memories of his own. Thankfully his memories returned on their own, because even on her supposed deathbed, Helena was playing mindgames with everyone.

After all that, we still have all the vile and dangerous things Ava Jerome has done

General Hospital spoilers say that Maura West made her debut as Ava Jerome in May 2013. Don’t let the timing fool you, she may have only been in town for just over 3 years, but she has caused enough havoc to last a lifetime. Ava arrives in town with a past. She is an ex of Franco (then James Franco), who was presumed to be the father of her daughter, Kiki Jerome (then Kristen Alderson).

At first, Ava is introduced as an art dealer, but that disguise is quickly overshadowed by the fact that she is the youngest member of the Jerome crime family. She fakes the DNA results, so she will have access to General Hospital’s richest family, the Quartermaine’s fortune, a con she was working with her older brother, Julian Jerome (William DeVry). Of course none of this worked out when it was proven that Franco’s father is Scott Baldwin (Kin Shriner) and not Alan Quartermaine (Stuart Damon).

GH’s Ava, like Helena, would let no one stand in her way. She murdered Connie Falconeri (Kelly Sullivan) when Connie figured out Derek Wells was actually Julian Jerome! When Connie managed to write “A J” with her blood, Sonny thought A.J. Quartermaine (then Sean Kanan) had killed her and he got his revenge and killed A.J. after he had promised his adopted son, Michael Corinthos (Chad Duell), that he would never harm him.

General Hospital fans know that no one is immune to swapping partners when it comes to our soap operas. We were all shocked when Ava started having an affair with her son-in-law, Morgan Corinthos (Bryan Craig). It was tough enough watching her daughter Kiki, fall for two brothers at the same time. When Ava found out she was pregnant, that story really took the cake. She continued to be with Morgan, not knowing if he or his father, Sonny Corinthos (Maurice Benard) was the father.

In 2015, Ava escaped from prison, only to be shot by Carlos Rivera (Jeffrey Vincent Parise), a Jerome lacky, who was getting revenge for being wrongly imprisoned. General Hospital’s citizens in Port Charles, believe Ava had died and they had a memorial service for her.

We later see that she is alive, but battling cancer. Dr. Silas Clay (Michael Easton) promises that he will euthanize Ava, if that is what she wishes. Later we find out, he kidnapped Ava and Sonny’s daughter Avery and used her bone marrow to save Ava.

Ava returns to Port Charles, pretending to be another Jerome daughter, Denise. She clearly didn’t learn anything and starts sleeping with Morgan again, even though he had reunited with her daughter. Ava is willing to do anything to get her way, but nothing can top what she is currently doing to a man she claims to have once loved.

Ava is stealing Morgan’s bipolar medication, causing him to become manic. The last time he was without medication he thought he was invincible and tried to stop a gun deal by himself, almost costing Kiki (Hayley Erin) her life. Morgan also became so depressed, he wanted to kill himself. General Hospital spoilers tell us that right now Morgan is spiralling towards a breakdown courtesy of Ava’s evil.

After everything you have watched on General Hospital through the years, who do you think is more evil? Ava Jerome or Helena Cassadine? Please vote in out poll below and come back to CDL for all your General Hospital spoilers, news and updates!