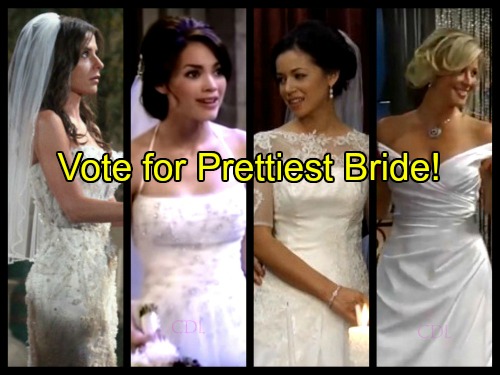 But before these four Port Charles ladies were in these stories, they were brides. But who was the prettiest? Vote in the CDL POLL.

Sam was married five time before she ever hit Port Chuck, but we never saw any of these grooms that she was conning in what were likely illegitimate marriages. Sam looked gorgeous in her beautiful white ruffled dress but then the real wedding took place in outfits much more like the non-traditional Sam and Jason Morgan (Billy Miller) in t-shirts and jeans at the Chinese restaurant.

So while Sam said her I do’s in a casual outfit, she looked absolutely stunning in her wedding down.

Liz has had quite a few wedding dresses over the years. Remember the spaghetti strap number when she wed Ric Lansing (Rick Hearst)? Then she had two gorgeous dresses when she married Lucky Spencer (Greg Vaughan) twice. But Liz’s best wedding gown was the one that ended in the wrecked non-marriage with Jake Doe aka Jason Morgan.

Liz looked like a princess in that gown with the puffy skirt but it was too bad her Prince Charming was already married (and Liz knew it!).

Sabrina was all dressed up with no place to go when her wedding to Patrick Drake (Jason Thompson) imploded because Robin Scorpio-Drake (Kimberly McCullough) came back from the dead. It’s a bummer to watch your fiancé and almost-husband make out with his wife at your wedding.

Sabrina looked gorgeous even while fleeing the church after her crushing disappointment.

Carly is a marriage frequent flier with enough gowns to start a bridal shop from five weddings with Sonny Corinthos (Maurice Benard) and Jasper Jacks (Ingo Rademacher), AJ and Lorenzo. Some dresses were better than others but none as gorgeous as the one for her non-nuptials with Franco (Roger Howarth).

The wedding may have crashed, but at least Carly looked great as she got burned.

So what do you think GH fans? General Hospital spoilers reveal lots of stuff happening with these ladies soon. Sabrina is getting back with Michael Quartermaine (Chad Duell) so maybe she’ll get a wedding at last. Liz is hanging with Franco so maybe she can recycle her last dress if they get serious.

Carly is headed for drama when Jax comes back to town and Sam may yet get re-hitched to Jason.

But for now, let’s consider the question at hand. Which of these four brides was the prettiest on their wedding day? Try to ignore the fact that three of these wedding gowns were put on in vain since the ceremonies did not make it to the “kiss the bride” phase. Vote in the POLL and share your comments below.

Be sure to come back to CDL often for more General Hospital spoilers and news.