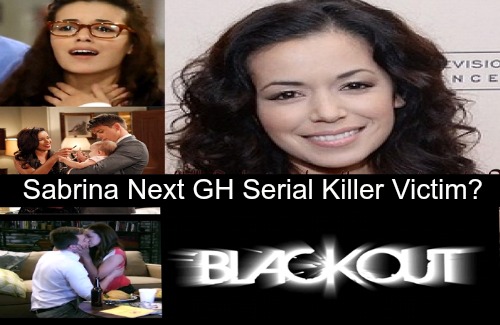 General Hospital (GH) spoilers tease that Sabrina (Teresa Castillo) may be the NEXT victim to die at the hands of the General Hospital Serial Killer. We know that on this week’s episodes the Jason and Sam’s wedding will take place in Sonny’s home. Will the GH killer show up at the wedding as a guest?

We do know that among the guests will no doubt be Sonny, Carly, Kristina, Alexis and of course Michael along with Sabrina. Perhaps, Sabrina should have skipped this wedding. It certainly does not look good for her!

It is being reported that Teresa Castillo’s contract with General Hospital is about up and there has been no word as of yet if TPTB plan to renew it. We do know that Sabrina’s storyline as of late has been somewhat slack despite the current love triangle in the works between Sabrina, Joe (Jeffrey Vincent Parise) and Michael (Chad Duell).

This triangle could soon come to a quick end should the GH killer decide to single out Sabrina. If the killer does manage to get to Sabrina, who will take care of Little Teddy “Edwardo” when the worst happens? Will Michael show up in time to save her?

The aftermath of Sabrina’s potential murder will be a tragic mess. In regard’s to Sabrina’s son, will there be a possible custody battle for Sabrina’s baby between Michael and Joe? Will Joe hold Michael responsible for Sabrina’s death and plan to exact revenge in any way by wanting to get custody and raising Sabrina’s baby himself?

General Hospital spoilers know that Sabrina’s life certainly has not been easy since we have seen her in Port Charles. We first got to know Sabrina as the geeky girl with big glasses and wild hair who had a mad crush on Dr. Patrick Drake (Jason Thomson, Y&R Billy Abbott) then of course she later found her way to Michael following that heartbreak.

If Sabrina is murdered by the killer at Jason and Sam’s wedding, at Sonny’s house, how will Sonny react to the news that a killer got into his home while his wife and kids were there? Will the killer strike during the Blackout? Anything is possible! Tune into GH this week to see how it all unfolds. It will be a KILLER week! Com back to CDL for all your General Hospital spoilers, news and updates.