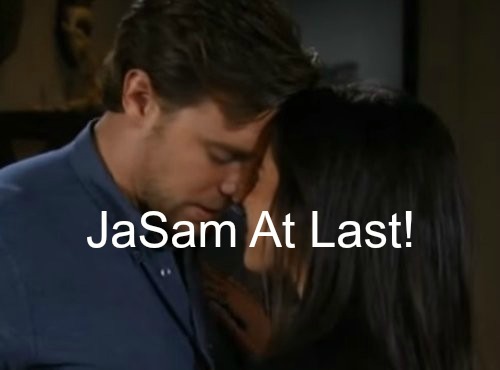 “General Hospital” (GH) spoilers tease that Jason Morgan (Billy Miller) and Sam Morgan (Kelly Monaco) may get a redo on their missed moment from New Year’s when they get closer this week. It looks like Jason is finally getting some of the mojo back that he had while part of JaSam.

Both Sam and Jason are at the penthouse they shared – each was considering moving back in, so it’s a happenstance meeting – but it could turn out to be so much more. As Sam and Jason were on the cusp of running into each other, Alexis Davis (Nancy Lee Grahn) was talking to her other girls about sex.

She talked about how it could be beautiful, transforming and worth the risk of loss. Was this foreshadowing that Jason and Sam may reignite their passion and that it will be transformative for Jason? Here’s what we might see in coming days.

While Sam and Jason are at the apartment, Jason reveals that he had another memory flash of his time with her. But this is very different from the other memories Jason has had. Everything before has been like Jason looking in from the outside onto his old life.

Jason felt like a spectator to the memories because he had no emotional attachment to them. But his next recollection of Sam will be much more vivid and will generate feelings in Jason. Before now, the only sense of romantic love and passion he’s felt as new Jason has been with Liz Webber (Rebecca Herbst).

So this occurrence – where he feels love for Sam for the first time (at least in this new life) – is a momentous milestone. Will this memory trigger Jason to kiss Sam – and will things get steamy from there? They had a near miss as the clock struck midnight to ring in 2016.

Will Sam and Jason more than make up for it now? If Jason has real feelings for Sam restored – or at least a significant moment where the feelings are real – they could let their passions go and indulge themselves.

After all, Jason and Sam are still married, he’s no longer with Liz, and they’re in the home where they made love thousands of times. Will Sam and Jason go all the way or will Jason pull back because he doesn’t want to give her false hope?

After all, a moment of remembered passion plus a moment of real passion doesn’t make an entire relationship. But will Jason give in to one night of steamy sex if Sam tells him it’s okay and it doesn’t have to mean anything more?

What do you think GH fans? Are you ready to see Sam and Jason get intimate? And if Jason pulls back, could Sam get more forward and actively seduce him to keep him from denying them this moment? What would you like to see happen between them?

Don’t miss a moment of GH and come back to CDL often for more on Sam and Jason’s new shot at love as well as detailed daily “General Hospital” spoilers, news and updates.