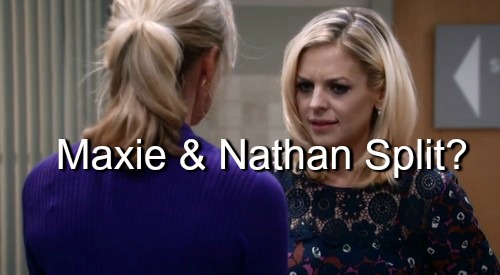 “General Hospital” (GH) spoilers indicate that Nathan West (Ryan Paevey) will scramble today to explain to Maxie Jones (Kirsten Storms) about “Claudette” and why he said he loves her. The lie he tells will be so far-fetched that it’s unbelievable. Is Naxie destined for a split?

GH fans will have to blame the painkillers for Nathan’s lame explanation that Claudette is a French poodle that he loved. Because most men whisper sweet nothings to their dogs, right? Maxie will not buy that lame lie for a minute.

General Hospital spoilers reveal that Felicia Scorpio (Kristina Wagner) puts in an appearance at the hospital and Maxie opens up to her mom about the ladies glove she found in Nathan’s tux pocket and the obvious canine conspiracy. Her mom tries to talk her down but Maxie isn’t having it.

After what Maxie watched Lulu Spencer (Emme Rylan) go through with Dante Falconeri (Dominic Zamprogna), no way is she going to sit idly by and let Nathan cheat – if that’s what she suspects he’s doing.

But perhaps Maxie is the “other woman” since we know Nathan hasn’t been seeing anyone else since he came to town. Is Claudette his ex? Whomever Claudette is, GH spoilers indicate that Nina Clay (Michelle Stafford) knows all about it.

But with Nina in a coma for 20 years and only recently out of it, does that indicate that the relationship is newer? Perhaps Claudette is the woman that Nathan was with before he came to Port Charles. Back when Nathan first came on GH, he sublet Maxie’s apartment, if you recall.

He and Maxie had a conversation at that point about mistakes they had and making a fresh start. That’s from several years ago, but could be part of this Claudette mystery. Nathan was a New York City cop before he came to Port Charles so perhaps Claudette was his NYC gal pal…

What a shocker it will be if Maxie finds out that she and Claudette have a lot more in common than just Nathan. Could Claudette be a NYC fashionista? Perhaps a model? All we know for sure is that Nathan still loves her and was out on the town with her while wearing a tux.

Thanks to Madeline Reeves (Donna Mills), Nathan enjoyed quite the high-society upbringing and a white glove isn’t worn by women just anywhere. That seems like debutante, high class type stuff. And that has the possibility to make Maxie feel inferior.

It sounds like this Claudette may be someone from Nathan’s ritzy world that he grew up in – something that’s a far cry from how Maxie was raised. We have to wonder why does Nathan still love Claudette? Did Claudette dump Nathan and that’s why he’s still pining?

Will we soon see Claudette in Port Charles to reclaim her man? Will Maxie realize that Nina has the answers she needs and grill her boss about her BF’s past love life? Looks like TPTB aren’t happy to let any couple remain happy and so Naxie will face a speedbump that could split them.

What do you think GH fans? Can Maxie compete with Claudette? Or is that morphine-riddled mumbling by Nathan the beginning of the end of Naxie as a Port Chuck power couple? Share your thoughts below and come back to CDL often for more “General Hospital” spoilers and news.