Gigi Hadid Fears Zayn Malik Will Leave Her Like He Did Perrie Edwards – ‘Pillowtalk’ Singer Unstable, Falling Out Of Love? 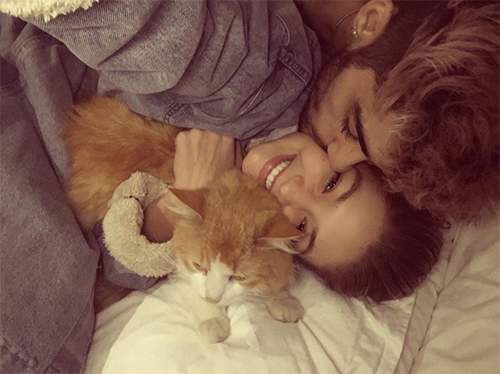 Should supermodel Gigi Hadid be fearing the worst for her romance with former One Direction member Zayn Malik? Since the release of “Pillow Talk,” the singer admitted that he apparently fell out of love of his ex-girlfriend Perrie Edwards. The relationship between the two is fairly new, but it’s clear that Yolanda Hadid’s daughter wants it to go longterm.

The controversial ex boy-bander recently opened up about his album “Mind of Mine,” which according to him, is 60 percent “falling in love” and 40 percent “falling out of love.” The 23-year-old heartthrob went as far as revealing that he wrote the heartbreak songs when he was in a “s**t place!”

Obviously, he was referring to his relationship to his girlfriend of three years, Perrie Edwards. It came as a huge shocker to Malik’s fans that he decided to end their romance just before he left his boy band members Harry Styles, Louis Tomlinson, Niall Horan, and Liam Payne early last year.

At the time of his departure, reports claiming that Malik wanted to live a normal life away from the spotlight emerged. However, it’s pretty clear now that Zayn’s real intention was to create his solo music and to be free from the restrictions his boy band image had asked of him.

Gushing about what it felt like to be with One Direction, Zayn Malik told Complex magazine: “It was about denying the authenticity of who I was, and what I enjoyed about music, and why I got into it…I had to go away.”

At present, Zayn is doing his own thing, and his first single “Pillow Talk” debuted at No. 1 on the Billboard Hot 100 last month. Aside from the really good vocals of the song, it helped that the music video featured his current 20-year-old ladylove. The two of them proved to have a difficult time keeping their hands off of each other in the video.

We’re not really sure if the same thing happens off-cam since it’s pretty elusive for Gigi to post snaps of her lover on Instagram. Two days ago, however, she shared a photo of her getting a kiss on the cheek from Zayn while she’s cuddling her pet cat. The last time Hadid enjoyed quality time with her boyfriend and her cat was five weeks ago.

So, based off of their busy schedules, it could be a challenge for Malik and Hadid to keep the fire burning. Plus, Zayn admitted that he is trying his best to keep his work and relationship separate as much as possible. Well, of course he is…until we see his girlfriend in another music video.

Should Gigi Hadid worry for her relationship with Zayn Malik? Share your thoughts below and always check CDL for regular updates on the latest Hollywood news and gossip.