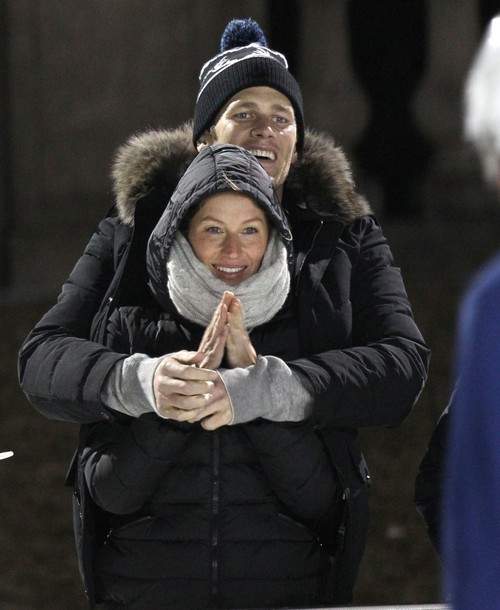 Did Gisele Bundchen walk out on an angry Tom Brady after New England Patriot’s devastating AFC Championship loss? Is the power couple headed for a multi-million dollar divorce? Is Gisele getting marital advice from a psychic?

Tom was all smiles and hugging his children after the loss to the now Super Bowl 50 champion Denver Broncos. An insider revealed to OK! recently that Brady was “raging over the game.” Gisele tolerated Tom’s foul mood for a couple of days then the couple started fighting.

After Tom and Gisele had an epic argument, which apparently “dredged up all their issues,” Bundchen reportedly just packed a bag and went home to Brazil for about a week. To cover up the near split Bundchen and Brady put on a serious PDA presentation at their son Benjamin’s hockey game not long after Gisele arrived back in Boston.

The PDA at Benjamin’s game wasn’t the only thing Gisele did to save the marriage. Bundchen supposedly sought the advice of a Boston-based psychic. But the psychic must not have given Gisele Bundchen the answers she was seeking. A source reports that Gisele “looked very concerned on her way out” from the reading.

The Victoria’s Secret model announced her retirement from runway modeling in April 2015. Allegedly this was another attempt on Gisele’s part to save the troubled marriage to Tom because she’d be able to focus all her attention on Brady and their two children. Now sources are reporting that Bundchen has had enough of it being the Tom Brady show 24 hours a day, 7 days a week.

Not only is Gisele Bundchen tired of the four-time Super Bowl winner’s selfishness, Bundchen is purportedly still seething over the allegations Tom cheated on her with Christine Ouzounian. This is the same woman with whom Ben Affleck supposedly cheated on Jennifer Garner.

At this point Gisele Bundchen and Tom Brady are living separate lives while trying to figure out their next move. An insider divulged that the marriage is a powder keg waiting to explode any day. But if Tom and Gisele get divorced they both fear they’ll be forced to give up their “power couple” status.

The source went on to explain that neither Gisele nor Tom is happy. Something needs to change, and it needs to change fast, or the next time Gisele packs a bag and walks out of the duo’s home it just may be the end of the Brady-Bundchen marriage.

Couple Tom Brady and Gisele Bundchen cuddled up to stay warm during their son Benjamin’s hockey game in Boston, Massachusetts on January 31, 2016. The pair were joined by Tom’s sister Nancy and her new husband Steve Bonelli. By FameFlynet