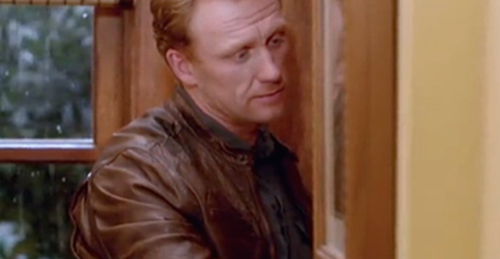 Tonight on ABC Grey’s Anatomy returns with a great all new Thursday May 19, season 12 finale titled “Family Affair,” On tonight’s episode, in the Season 12 finale, an important day arrives for Amelia, (Caterina Scorsone) and Meredith (Ellen Pompeo) and Maggie (Kelly McCreary) provide her with support.

On the last episode, Owen and Amelia grew closer as their romance progressed. Meanwhile, Alex gained insight into his future with Jo; and Callie and Arizona’s custody arrangement proved to be far from harmonious. Did you watch the last episode? If you missed it, we have a full and detailed recap right here for you.

On tonight’s episode as per the ABC synopsis, “in the Season 12 finale, an important day arrives for Amelia, and Meredith and Maggie provide her with support. Meanwhile, Jo confesses she’s been keeping secrets; Arizona and Callie face the effects of their custody agreement; and Ben assists a friend.”

This episode looks like it is going to be a great episode and you won’t want to miss it, so be sure to tune in for our live coverage of ABC’s “Grey’s Anatomy” Season 12 finale at 9 PM EST!

Meredith was still being a pessimist on tonight’s episode of “Grey’s Anatomy” however she wasn’t the only one that was calling Amelia’s marriage to Owen doomed.

Amelia’s family also didn’t approve of the wedding and they were refusing to attend or in anyways be supportive. Apparently Amelia had tried to call up her family and she had even begged her mother to come to her wedding, but they still didn’t budge. They said that Amelia was rushing into her marriage to Owen and that she had already been engaged before. So simply put they didn’t have faith in her decision making and Amelia’s own mother questioned Amelia’s sobriety.

So Amelia practically fell apart once she realized that no one on her side was coming. However, April who was acting as Owen’s best man had been at the house so she was able to warn Owen about the impending disaster if he didn’t get over there. And fortunately Owen was able to calm down Amelia because he reminded her that they loved each other and that’s why they were getting married.

Meredith on the other hand revealed a few things to Alex about Owen and Amelia’s relationship and it seems she had a reason for why she thought the two’s marriage was going to fail. Meredith told Alex that Amelia wasn’t Cristina. Cristina didn’t explode emotions like Amelia and Cristina was able to push things down in order to carry on. So the problem that Meredith had with Owen and Amelia was that it wasn’t Owen with Cristina.

Only Alex didn’t think it was necessary to ruin someone else’s happiness. Even if he did think that there may be just one person meant for everyone. So while Alex went off to break up with Jo who had turned down his marriage proposal last week, Meredith had gone off to talk to Owen. Meredith had told Owen that she was in charge of Amelia because that’s what Derek would wanted yet she reminded Owen that she had promised Cristina to look after him. And Owen’s response was as expected.

Owen said he was happy and that what he had with Cristina was over. So Owen didn’t buy into Meredith’s story that Cristina was his one and only. He thought he could put the past behind him and that’s what he wanted to do with Amelia. But, Amelia overheard his conversation with Meredith so she thought that had made her later blow up.

Amelia later yelled at Meredith because she didn’t have her family, Derek was dead, and so the only person that she thought would be reasonable while supportive should have been Meredith. Yet, Meredith didn’t like her and was rooting for the other team. So Amelia had her moment when she just exploded and got everything out. Including her doubts about marrying Owen so Meredith told her that if they needed to go then should just go.

And they did go. Amelia, Meredith, and Maggie all left the church to drive away but April had been nowhere around to put out that particular fire. April had gone back to Meredith’s house because she realized she had left the wedding rings there. So she and Ben who drove her to the house had thought it would be a simple quick stop yet April ended up going into labor in Meredith’s kitchen and she didn’t want to drive to the hospital. At least not in the horrendous rain.

The weather outside was horrible and April thought she could have a home birth. Which she thought was easy because her mom might have given birth in a barn. So April was set on having her baby at Meredith’s house and she had asked Ben to help her. Only Ben did a pelvic exam and he found out the baby was breech and he also didn’t feel a pulse.

So the baby was dying and that had made April desperate. April had lost her last child and she refused to lose a second one. However, April couldn’t be moved to the hospital by that point and the ambulance was taking too long. And so April turned to Ben and asked him to perform a C-section using the knives in Meredith’s kitchen.

She said that they could do it and that she trusted Ben. But Ben remembered the last time he had performed an emergency C-section so he can recall how both mother and child later died from the mess he had made out of it. And he didn’t want repeat that with April or her baby. So Ben decided to call his wife for help.

Bailey was at the hospital so she was able to put Ben on the phone with both Arizona as well as Jackson. So all three tried to talk Ben through the procedure yet April wanted to add her input. April told Ben that his first priority was the baby’s life – not hers – no matter what Jackson said. And so with everyone counting on him, Ben performed a C-section on April with no drugs or anesthesia.

Meanwhile back at the church, the missing three had come back however they waited out in the parking lot until Amelia was sure about what she wanted to do. So they literally waited for hours before Amelia finally decided that she did love Owen enough to become his wife. And by then Riggs had dropped off the rings. Riggs explained to Owen that it was a bit hectic with April because she had her baby and was at the hospital.

But April was going to be fine. Ben had delivered the baby safely and April had been rushed to the hospital where Arizona was able to stabilize her. So Ben was a hero. He had showed skill under pressure and he had won back Bailey’s trust.

Only Jo managed to destroy whatever chance she had with Alex. Alex had come back to the apartment because he missed her and regretting breaking up, but he had seen her with DeLuca and gained the wrong impression. So even though Alex thought Jo had quickly moved on, Jo had actually gotten drunk and revealed to DeLuca who kindly drove her home that she was married. To an abusive guy that didn’t know where she lived so that’s why she couldn’t divorce him or marry Alex.

And yet one wrong impression has led to so many things going wrong. Alex began beating up DeLuca and Meredith was put in an awkward positon with Maggie. Maggie had told her sister that she was interested in Riggs and Meredith was left stumped because she didn’t know how to tell Maggie that she slept with Riggs and that there was a chance it could happen again.