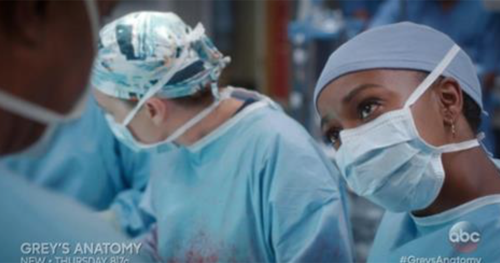 Did you watch the Grey’s Anatomy season 13 episode 6 where the arrival of a new consultant put all of the doctors on edge, especially once she started stepping on toes in the OR?  If you missed it, we have a full and detailed recap right here for you.

On tonight’s Grey’s Anatomy episode as per the ABC synopsis, “A difficult surgery brings back pivotal memories for Meredith, Richard, Owen and Stephanie, as they work together to save a life

[2016-11-10, 8:31:57 PM] Kristine Francis: Richard hadn’t been in the right mind set on tonight’s episode of “Grey’s Anatomy” and unfortunately there had been a reason behind that. Richard, you see, had started to feel irrelevant. He had been told not that long ago that the way he handles the residents and more importantly their education was outdated. But Richard didn’t know exactly how to change. He’s been teaching fresh doctors for the same way for the past thirty to twenty odd years. So there was a part of Richard that wondered if it was his method or just him that was the problem.

Though how Richard went about trying to reassert himself was a bit aggravating. Richard had eventually offered to lend a hand to Meredith and Owen during a surgery that looked especially gruesome. So at first the others had been happy to accept his assistance because they were swamped with their John Doe however they soon felt a little frustrated when Richard asked that they play a game. Richard had apparently wanted to give their John Doe name because they said that they shouldn’t be just mechanics. He felt they should also care about their patient.

So Richard got to play his game. He had told Stephanie that they could give their John Doe a background story and that he didn’t even have to stay a man. However, Stephanie was the only one that willing to play that game and she came up with Brandon. Brandon was the guy that usually parked right next to her and he worked in the IT department yet Richard didn’t want to go with Brandon or even Stephanie’s second choice. Richard had wanted their patient to be Gayle and so the patient had become Gayle.

Richard had said that Gayle had three kids and that music had helped keep her sane. Yet, Gayle also taught music at a high school while she waited for her big break because she had dreamed of becoming the lead cellist for the Chicago Symphony. So Richard had been very thorough as he came up with this supposed story about Gayle who was one of the good guys, but Richard had gotten sometimes too carried away. He would talk about Gayle like she was a real person and he actually stepped on some toes when he told Meredith that he couldn’t risk the patient.

Meredith though didn’t think she was. The patient had a liver in pieces as well as failing kidney so she thought that they should preserve the liver over the kidney. But Richard and Owen hadn’t agreed with her assessment. They thought it was too risky and so Richard had come up with an alternative. He had said that they could call in for an emergency liver transplant and that they could focus on the kidney in their interim. So Meredith had gone on to shoot that idea down. Meredith had said that they wouldn’t know when the liver would come and she had even pulled rank.Meredith had shouted at Richard that she outranks him after he still tried to convince her that his idea was good. Though Owen who was of equal rank as Meredith had felt that Richard had a point so all he had needed was a push. Owen had remembered surgery with his sister and how they had always stood for the same thing. They had to try and save the patient at any cost. So while Richard had been cowed by Meredith, Owen had just clipped off the liver and demanded a transplant.

Meredith had shouted at Richard that she outranks him after he still tried to convince her that his idea was good. Though Owen who was of equal rank as Meredith had felt that Richard had a point so all he had needed was a push. Owen had remembered surgery with his sister and how they had always stood for the same thing. They had to try and save the patient at any cost. So while Richard had been cowed by Meredith, Owen had just clipped off the liver and demanded a transplant.

So there was nothing that Meredith could do. The liver had been removed and the only choice for their patient was for them to wait on a transplant even if she had been extremely upset that Owen had completely ignored her during Surgery. However, neither Owen nor Richard were the only one that felt some type of connection with this surgery or the patient. Stephanie had also remembered a few things from her past. She had remembered reading all of those medical books when she was young and sick so she remembered how they could help the patient.

Stephanie knew what they needed to do when the patient had started to bleed through the eyes and some blood was also showing up in his urine, but she had a problem in the OR and that was the fact that no had wanted to listen to her. Meredith, Richard, and Owen were all fighting about their next course of action and they just kept talking over the resident. So Stephanie saw her younger self and younger self-reminded her that she speak up. How can anyone her if she doesn’t assert herself? Yet, that doing that was a lot harder than it looked.

Stephanie had still tried to speak normally though eventually being ignored had gotten her so mad that she had basically yelled at her bosses that they were going to kill the patient. So Richard asked her what they needed to do and later told her well done when her reasoning proved to be sound. Yet, despite everything they did and the time that Stephanie had bought them, the patient had crashed and he would have died if Meredith hadn’t her own moment. A nurse had apparently entered the OR because she John Doe’s family had come into the hospital.

His wife and two kids had heard about the crash on the news and so they had rushed to the hospital where they found out that John Doe really was their Carl. But hearing that Carl had two kids had reminded Meredith of Derek. Meredith remembered when she had to tell her kids that their father had died and she hadn’t wanted to do that to someone else. So Meredith came up with something drastic however it did what it needed to do. It had stabilized Carl and they had been able to close him up.

Though afterward Meredith had asked Richard about Gayle because she knew that he hadn’t made Gayle up and she was right. Richard hadn’t made up the story of Gayle. Gayle had just been his mother who died of pancreatic cancer when he was still a kid. So Richard had told Meredith that he continues to use his mother’s story because there had been a time when he had offered a family about their loved one and he had been numb. And so every patient because his mother in order for them to become real for him and to make him a better surgeon.