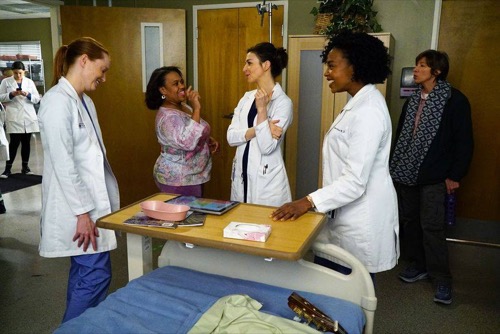 Tonight on ABC Grey’s Anatomy returns with a great all new Thursday April 7, season 12 episode 17 titled “I Wear the Face,” and we have your recap below. On tonight’s episode, Meredith (Ellen Pompeo) discovers why Owen (Kevin McKidd) is so hostile towards Nathan (Martin Henderson) when she accompanies them on an ambulance ride to pick up a heart for a transplant patient.

On the last episode, Meredith got closer to Will, but then she had regret. Meanwhile, Amelia reassessed her relationship with Owen; Catherine stirred the pot when visiting Jackson and April; and Maggie noticed a detachment between herself and Andrew. Did you watch the last episode? If you missed it, we have a full and detailed recap right here for you.

On tonight’s episode as per the ABC synopsis, “Meredith discovers why Owen is so hostile towards Nathan when she accompanies them on an ambulance ride to pick up a heart for a transplant patient; a musician with MS is admitted with a tremor in his hand; the residents apply for the Preminger Grant; and Catherine continues to insert herself into Jackson and April’s business against Richard’s wishes.”

This episode looks like it is going to be a great episode and you won’t want to miss it, so be sure to tune in for our live coverage of ABC’s “Grey’s Anatomy” Season 12 Episode 17 at 9 PM EST!

Things got a little weird for April on tonight’s episode of “Grey’s Anatomy”. Apparently her teenage patient had revealed to her that she was pregnant too, but like April had done in the beginning, the teenager has decided to hide her pregnancy. Which in this case means she hasn’t gone to a doctor before and her own parents don’t even know that she’s pregnant. And yet the teenager asked April not to tell her mother, April agreed.

She was concerned yet she still agreed. However, unbeknownst to April, her former mother-in-law was using April’s own secrecy to try and get her rung up on fraud charges. Catherine had told both her husband and her son that what April did was fraud because April had known she was pregnant when she signed the divorce papers. So Catherine believes that if uses that to undermine April’s position in court then her son wouldn’t have to fight with April about the bigger things. Such as getting his name on the birth certificate and possibly custody later down the line.

Yet, both Richard and Jackson thought Catherine was going too far so Jackson has been pretty much ignoring all the attorneys she kept trying to set him up. And while April still didn’t know what was going, she did know that she had to work alongside Arizona again. It seems they found something wrong with the teenager’s CAT Scans so it was important for them to notify her and Ben thought they should also notify the teenager’s mother as well.

And surprisingly April agreed with him. At first she had been all for respecting her patient’s wishes, but that changed after she found out about the bubble. Jenny had a bubble in her brain which meant she had potentially aneurysm on her hands and that it could kill her. Though it had been Arizona’s job to inform their patient that they could wait on doing anything and see if the bubble resolves itself.

April on the other hand had thought surgery was the better option. She told Jenny that way they could protect her and her baby yet the teenager had been more concerned about her mother finding out than the chance of possibly dying. So April had judged her for that. She said that any mother that didn’t put their child first was selfish.

Elsewhere in the hospital, though, the residents were all vying for a one of kind of grant that would make their career so most of them had decided to go after it. Penny however chose to sit this one out. She told Callie that she was still new to the program and that the other residents had been around a lot longer. And so Penny was truly going to sit this one out, that is until she heard one of her new friends dumping on her.

That’s all it was! Simple and pure jealousy, but Penny had gotten upset and afterwards she felt like she had something to prove. So she purposely went after that grant mentioned earlier and she told her girlfriend that she wants to prove to everyone that Dillard’s did prepare her. And that she was her supposed friend’s equal.

Therefore, both Penny and Stephanie had showed up for surgery with Amelia on their A game. They had both wanted to impress and Stephanie certainly did when she remained calm through surgery and kept their patient alert. Which sounds unusual, but not this time. The patient had been experiencing tremors in his hands so Amelia had asked him to continue to trying to play his guitar during surgery and that should help her find the root of the problem.

And so it had been Stephanie’s job to keep the patient calm. At first, she was upset that she wasn’t going to be scrubbing like Penny was doing however she was able to give Amelia some much needed feedback and Amelia had promise to vouch for her when Bailey asked for recommendations for that grant. So Amelia and Stephanie were still very much on close terms despite her earlier fears.

Though, later, April and Arizona were able to make some headways in repairing their friendship. April had apparently realized how much of a hypocrite she was after she, herself had ended up telling Jenny’s mother that the teenager was pregnant and so that actually bonding moment with Arizona had come about as she tried to explain herself by saying that it was the right thing to do. And, well, Arizona replied that she knew that feeling. That single moment when you know you’re right and nothing can dissuade you.

Which was like Owen. Owen had revealed to Meredith that his sister hadn’t been talked out flying with her patient. She had actually gotten on the helicopter to get away from her cheating husband that had been sleeping with one of the nurses. So Owen had told Meredith that’s why they hate him and yet he went on to say something very different to Riggs. He told Riggs that he wasn’t going to allow him to take any more people from him.

And so even if Owen was right about what happened, he was borderline on the Riggs issue.

Stephanie however had gone on to apologize to Penny for what she said earlier and the two had been on their way to moving passed everything when Jo told on Penny. Jo said that Penny had put in her application and that a lot of attendees had vouched for her. Including Amelia who only had good things to say about Penny.

Yet, Stephanie had seen that as a betrayal. She had been upset with Penny for being what she thought was underhanded and she had been upset that Amelia hadn’t shot Penny down. So she later accused Amelia of vouching for Penny because she wanted to get rid of the other woman and hadn’t cared that she was hurting Stephanie.

Only that’s not what happened and Stephanie’s mouth has cost her two friendships instead of just one. Although, at least she hadn’t made the same mistake as April. April had overheard Catherine and so she thought Jackson was going to take her to court, but he wasn’t. And now he has a reason to because she hit him with a restraining order.