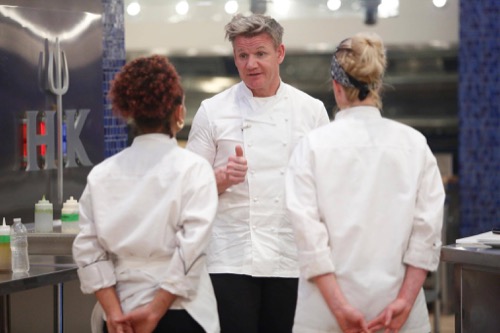 Tonight on NBC world renowned chef Gordon Ramsay’s television series Hell’s Kitchen where aspiring chefs compete returns with an all new Friday April 29, season 15 finale called, “Winner Chosen,” and we have your weekly recap below. On tonight’s episode, the Season 15 finale pits the two finalists against each other in a five-course cook-off. In the end, a winner of $250,000 and a head chef position at BLT Steak at Bally’s Las Vegas is selected by Gordon Ramsay.

On the last episode, after Chef Ramsay unexpectedly eliminated twos. The remaining chefs were challenged to perfectly prepare a steak dish, plus two stunning sides in just 40 minutes. They had to impress special guest judge, executive chef Ari Rosenson from CUT by Wolfgang Puck in Beverly Hills, who had the final say on the winner of this meaty challenge. Did you watch the last episode? If you missed it, we have a full and detailed recap right here for you.

On tonight’s episode as per the NBC synopsis, “after facing a number of grueling challenges and dinner services, this season’s finalists will compete one last time to see who will be victorious and claim the winning prize of $250,000 and a Head Chef position at BLT Steak at Bally’s Las Vegas. During the finale, the Top Two finalists will create five stunning dishes, cold and hot appetizers and main entrées featuring chicken, beef and fish.

This week on the season finale of Hells Kitchen the final two Kristen and Ariel are told that they are going to BLT Steak in Los Angeles. When they arrive they find out that they will be staying in the Presidential suite at the Biltmore. They go upstairs and are surprised to find their families waiting for them. Ariel says “I really look up to my little sister and I missed her and as soon as she hugged me I knew she felt the same.” Chef Christina comes in and tells the ladies that they need to go work on their menus.

The next day they meet with Hells Kitchen winner Paul Niederman who gives them some much appreciated advice. He tells them “Pick your teams and make sure you have all of your ducks in a row. Also don’t do things only you can do.” He also tells them “Don’t scream and yell or belittle your brigade.” When the meeting is over the ladies head off to be pampered at the spa.

When they return Paul is waiting for them again and they share a drink. While they are with Paul Chef Ramsey comes in and surprises them with a helicopter tour around Los Angeles. They end up on the USS Iowa where they find out that the final challenge will be taking place. The crowd is excited to see them. Chef Ramsey tells them “You both have one hour to create five stunning dishes.” The dishes are one cold appetizer, one hot appetizer and three entrees. They are assisted by Sous Chefs Christina and Eric.

Chef then tells them they will be choosing their brigade right then and there and brings out the rest of the eliminated contestants from this season. Kristen gets to choose first by virtue of winning the challenge and chooses Ashley. Ariel chooses Jackie. Next up Kristen selects Frank. Ariel chooses Manda as her next selection. With her next selection Kristen chooses Joe. Ariel selects Dannie. For the last selection Kristen chooses Chad leaving Jared to be on Ariel’s team. She tells him “Obviously you are going to be on my team and you have a group of women that I know you like to listen to because you are a Momma’s boy.”

Ariel is working to get her team organized and ready to go. Meanwhile Kristen already has appetizers working in her kitchen. The first order is immeadiately suspicious. Chef Ramsey tells Kristen “There is something wrong.” Kristen is upset as chef tells her “This is for your parents. This is just not good enough.” Ashley works with Frank and they manage to get the appetizers out to Kristen’s parents.

Dannie makes a mistake on the pork chops and has to refire. In Kristen’s kitchen the entrees are leaving the kitchen steadily until Joe messes up and has to refire his entrée. Meanwhile Ariel has managed to get Dannie’s refired pork chops out to the dining room and the customers love them.

Jackie cuts the Sea Bass disproportionately and has to start over. She manages to get it right and the fish makes it out to Ariel’s family. In Kristen’s kitchen she falters a bit and Chef has to step in. He tells her “You are dictating the pace at which food leaves the kitchen.

Meanwhile Ariel has pork chops come back to her kitchen because they are undercooked. Chef yells at Dannie and tells her “I know you don’t care but I do.” Ariel yells at her “Come on Dannie you can do this. I know you can.” Dannie gets frustrated and walks out of the kitchen after asking Jackie to take over her station. Ariel says “Chef says one mean thing to you and you walk out and cry? Come on.” Manda also says “Unless you’re dying get over it.”

In Kristen’s kitchen Chad’s steak is raw and Ashley has to step in and help him. The teams manage to push and finish dinner service successfully. Chef tells Kristen and Ariel “Both teams had their issues but you did a good job.” He then tells them to head up to the dorm while he considers his decision.

As the finalists wait Chef Ramsey reviews everything. When he finally makes his choice he calls them to come to his office. He tells Kristen “You were a late bloomer in Hells Kitchen, but when you stepped up you found your voice.” He tells Ariel “You were a leader from day one and were not shy about it.” He then places them in front of their respective doors and tells them “When I count to three open your doors.” Each one of them pulls the handle and the winner is revealed as Ariel. Ariel stands at the top of the stairs crying.

Chef congratulates Kristen and she says “I feel proud and excited. This opportunity is going to open a lot of doors for me.” Ariel says “A quarter of a million dollars is unbelievable to me. I have never had more than 200 in my bank account.” She speaks to the crowd and says “I have to thank my family and my fellow contestants. I learned something from everyone of you. Without you I couldn’t have done thos.” The crowd cheers as Kristen and Ariel embrace!