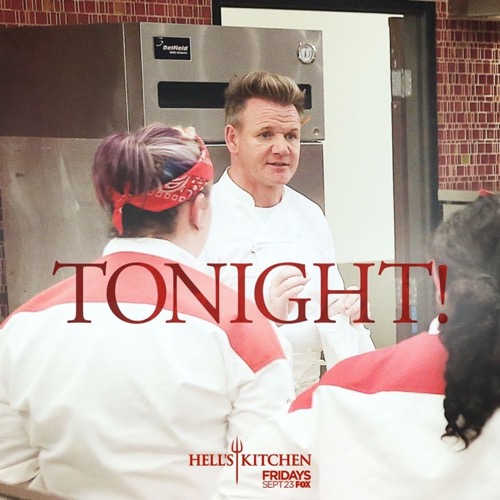 Did you watch last season Ariel was chosen the winner of Hell’s Kitchen?  If you missed it we have a full and detailed recap, right here!

On tonight’s Hell’s Kitchen season 16 premiere as per the NBC synopsis, “On the Season 16 premiere of HELL’S KITCHEN, Chef Gordon Ramsay welcomes the newest crop of hopefuls on the grounds of a U.S. Army training facility. The 18 aspiring chefs will have to demonstrate they have the discipline to succeed in HELL’S KITCHEN, before proving their culinary skills in the kitchen. Once Ramsay is confident they have a chance to survive.”

To start, the season is promising to be “Jawdropping”… “Dangerous”… “Emotional”… “Outrageous”… “Explosive”… But Beware…. “Cuz if you can’t stand the heat get the hell out of the kitchen!”

If the narrative isn’t enough for you, we see a preview of what is to come, and one of the contestants cuts her finger off during kitchen service, and has no idea where it is. Looks like Chef Ramsay may have finally reached a season where he is the one who is shocked beyond words!

Chef Gordon Ramsay has the 18 contestants travelling by a “party” bus to an unknown location, most of them are excited and over confident, while others, like Johnny, 29 (Burger Chef), would rather sit back and observe. The drama is already starting when Pat, 47 (Culinary Instructor), is telling one of the girls that her voice sounds like nails on a chalkboard, and she proceeds to call him “Grandpa”.

Hell’s Kitchen officially starts when the bus arrives at a U.S Army training facility instead of at a restaurant to make their signature dishes. Gordon Ramsay arrives in style, of course, in an army tank. He tells the contestants that he needs to know that all of them are properly disciplined – needed to survive Hell’s Kitchen. He can’t think of anyone better to train them than the US army.

The contestants go through an obstacle course, and then they are forced to run military style to where Chef Ramsay is. There was a repelling wall behind him, and they thought they were going to have to climb it, but instead the wall collapses and Ramsay in in the middle where the wall was plastic. He then tells them they are ready to create their signature dishes for him.

Just before the Hell’s Kitchen contestants are sent in to create their signature dishes, Chef Gordon Ramsay announces what they are fighting for. The winner will become head chef at the YardBird Southern Table and Bar in the Venetian Hotel in Las Vegas.

We start with Pat against Gia and their signature dishes. Gia’s signature dish is Shrimp and grits, with cheese and bacon 4/5. Pat serves pan-seared sea bass with a light citrus risotto 3/5. Then we have Aaron, who make Pork Schnitzel with Blaukraut, but before he can taste his food, he makes fun of his clothing and if his parents know he is on the show. He gets a 4/5.

His opponent, Wendy, presents him with her version of Tomato soup and he complains that it smells too much like garlic and she only gets 2/5. Heather makes Rib-eye with potato and Brussel sprouts, and she is the first to receive 5/5. Paulie is up against her with his biscotti crusted scallops and crispy polenta and he also receives the first 5/5 for the men.

It looks like Hell’s Kitchen already has a couple front-runners, or at least some strong opponents. Chef Gordon Ramsay is behaving himself thus far and not too many swear words have slipped, nor has he spit up or smashed any food or plates. So far, it’s a good night, no?

We return with the signature dishes. First up is Devin Who made Parmesan risotto with bacon-wrapped scallops. Chef says he is struggling to give it even a 1/5. His opponent Kimberly’s dish was Pappardelle Pasta with Clams. She says she catering director for a Latin infused sushi truck. Ramsay asks her what kind of Japanese infused food is he going to have. She says none, and hands him a plate with canned clams and store bought pasta. A HUGE “no-no” in his eyes!! 1/5

California Saute Chef Matt is up and his dish is Dove breast Bolognese. Chef has a hard time with a chef who has never made a pigeon dish before, but makes a joke that he is Matt’s “guinea pig” and wonders who would serve it as their signature dish. Eyes closed and first swearing is done… He brings the fork to his mouth. 1/5 . Aziza is his opponent and she serves him grilled Salmon with potatoes and arugula. He says it would be a great meal to eat in the dark because it tastes good but looks dreadful. 2/5

For the men, we have Genaro who serves seared Duck breast as his signature dish. Ramsay, of course, couldn’t help but joke that if he was sure it was “Duck” and not “Dove” breast. Ramsay picks up the duck and says, “Genaro really ducked up this dish!” and gives him 1/5. His opponent is Kimberly Ann who also serves Scallops with jalapeno mango salsa and spicy toasted rice crispies. When asked why she is doing this, she said that it’s for her 4-yr-old daughter, so she knows that she never has to work and stay at a job she hates. 5/5.

Shaina is up next and she serves Chef Ramsay a Salmon Wellington. He doesn’t respond but gives her a 3/5. Her opponent, Koop, serves a plate of surf and turf, and he gets a 4/5. Jessica is up for the women, and she serves bacon-wrapped chicken with risotto; and us fans are excited to see that Gordon Ramsay has finally spit out his first dish of the night, and tells her he is going to struggle to give her a 1/5. For the men, Andrew is up next to impress Gordon Ramsay. He has made a pan-roasted Halibut with leeks, mushrooms in a fish broth. Even though he went to an expensive school, Ramsay says his mushrooms are terrible and he gets 2/5.

Johnny is up with a ribeye and farro with beans. Chef Ramsay asks what he does and he says he is a Head Chef, Ramsay asks him and how big is the brigade, and he replies he is the only one in the kitchen, and Ramsay laughs. 4/5. The last person up is Heidi who brings up a Ricotta Gnocchi. The women win and are headed out to a restaurant in a limo, Ramsay likes to refer to as a “night club on wheels”. They even have the pleasure of Gordon Ramsay joining them for dinner. He gives them advice and they tell him their goal is to get all the men gone!

Past Winners Scott and Christina come to visit the women and tell them that usually the person who wins the signature dish, does NOT win the show. The men are furious back in Hell’s Kitchen, and everyone jokes about the “Dove” breast, which is not sitting well with Matt.

After a great night together, the women’s team (RED) seem to have it together and are working as a team. The men (BLUE) are seemingly together, but it seems more like it’s duct tape holding them together rather than glue. Chef orders Marino to open Hell’s Kitchen. Besides the menu, there will be table side, handmade linguine and clams, by RED team’s Ryan and Kimberly. BLUE team has Aaron and Koop.

Pat is making appetizers and brags that Italian kids do not eat rice, they eat risotto. When he brings the pan to Chef Ramsay, he calls the BLUE team forward and says that it’s “vomit dipped in oil.” RED team is shooting out their appetizers, even with a compliment from Ramsay. The re-fired Risotto is destroyed again because Pat kept adding salt to the dish when he wasn’t even cooking it.

Things are going fine for the RED team but the BLUE team is falling apart. Raw scallops came up. Ramsay demands to know who made them before he kicks them out. Matt tries to place the blame on Andrew. Matt admits he was cooking them, but Andrew said they were ready, so he served them. When Ramsay asked Matt if he was the one who cooked them, he tells Ramsay to check the cameras. A very bold and stupid move on Matt’s part.

Gordon Ramsay calls Matt over, and tells him to look at him, and to look at him in the eyes. They are nose to nose and Matt is nothing but attitude. His arms are crossed. He tells Matt to uncross his arms, and to look directly in his eyes and to not serve him anything but a perfect scallop, “cut the attitude, cook it or f**k off!”

There is nothing bad to say about Hell’s Kitchen’s RED team, as they seem to be wiping the floor with the BLUE team. Chef Ramsay just shouted out the entrée and once again they screw up and Ramsay kicks out Matt and Genaro; tells the team if they do one more thing wrong he is going to kick them all out. The girls finish the night and celebrate, and the Blue team is called back to the kitchen. Chef Ramsay doesn’t even let them get back to the kitchen before he starts in on them. “PATHETIC!” He tells them that compared to the red team they were pathetic and he wants 2 nominees.

As they are debating, Matt states he has a military background and that is how you talk to them. Ramsay asks Andrew who’s nominated, and he tells Ramsay, “Pat and Matt.” He chooses Pat to go home.

“Pat was Italian and couldn’t even cook Risotto. What a Meatball! Ciao Pat!!”

Be sure to watch FOX’s Hell’s Kitchen and check back for updates, news, rumors and spoilers!