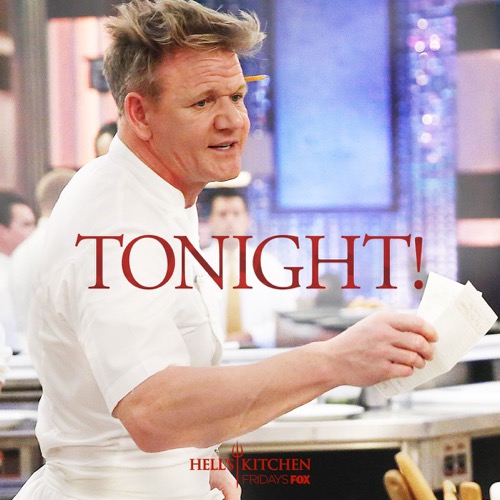 Tonight on NBC their Gordon Ramsay culinary competition series Hell’s Kitchen airs with an all new Friday, December 16, 2016, season 16 episode 16 “The newly formed teams are presented with their first challenge, which is cooking sliders for three special guest judges. Later, the chefs try to impress their celebrity diners, who include Crystal Hefner, Melissa Rivers, Drew and Jonathan Scott, and Ashley Greene.”

Tonight’s episode begins with the Red team deciding who should join the Blue team under Chef Ramsay’s instructions they vote and Kimberly is the one with the final vote. The teams are called into the dining room where Chef Ramsay informs the Blue team that he asked the Red team to have one volunteer to leave the Red and join the Blue. Ramsay asks who it is going to be and Ryan raises her hand saying that if she can move over to a weak team and get them through a dinner service, it will look really good on her.

The challenge is sliders, each team is going to create a variety of sliders including seafood, beef, poultry, lamb and pork. Chef Ramsay asks them to decide who is doing which kind of slider. Heidi asks right away for seafood, but Matt brushes her off insisting he will win.

When each team member has chosen their protein, Chef Ramsay escorts them outside, where there is a ball pit; on each of the balls there is an ingredient written on it. Red team needs to grab the red ones and the Blue team needs to get the blue balls. They are told they have 40 minutes to slide down for the ingredients for the garnish and the cook time of the sliders. Blue team is running in with 30:44 minutes, while the Red team is waiting for Andrew with 26:51 minutes left they arrive in the kitchen to begin creating their sliders.

The three guest judges are Adam Fleischman, founder of Umami Burger. The second judge is Chef Sang Yoon, owner of Father’s Burger and the final judge is Christina Wilson, the winner of Hell’s Kitchen Season 10 and executive chef at Gordon Ramsay Burger.

Paulie (blue) and Matt (red) are the first ones up with their seafood sliders. Matt gets offensive when the judges tell him his slider is not a slider, nor like a lobster roll, like he descried it. He gets a little rude with Christina and Chef Ramsay asks him if he asked for a lobster roll, if he would give him a slider? Matt lies to the judges saying his team completely agreed with him doing it, Heidi shook her head and said she was from Maine and she wanted to do seafood. Matt says, “what do they know, that’s why they are running burger joints!” Paulie clearly wins the point.

Shaina (blue) and Heather (red) are up with the traditional beef slider. Heather wins and they are tied 1-1. Next up is the poultry burgers, Devin (blue) and Heidi (red), the red team has it’s lead 2-1, when each judge picked red.

Battle of the pork is next with Wendy (blue) and Kimberly (red) are up. Chef Ramsay tells Kimberly her dish is horrible, but the judges are split and each team receives a point, with red still leading 3-2. The lamb sliders are up Ryan (blue) and Andrew (red) bring up their sliders. Andrew gets a bit cocky when Ryan is told she could have used yogurt and it would have been great, and he did use yogurt but is told his lamb is too bland.

The blue team gets the point making it 3-3, so the judges need to pick which was the best slider of the day, and it belonged to Heidi on the red team. The reward is spending the day at the Playboy Mansion, and they will be escorted by Hugh Hefner’s wife, Crystal. Chef Ramsay sends off the red team to enjoy their day.

The punishment is the blue team will be spending the day giving back, picking up garbage at the L.A. River. They are responsible for cleaning up all the litter and cleaning up the debris and making the riverbanks spotless. Chef Ramsay says they will not regret it, that it is very rewarding work.

The red team is enjoying the animals in the back of the mansion, and cheering each other for winning. Matt is acting like a fool around the women. The blue team is at the river where Wendy is excited because she is an environmentalist, but her blabbing is driving the whole team crazy. Devin says he believes in karma and doing this is a good thing.

Both teams are back at Hell’s Kitchen prepping for dinner service in a couple hours. The red team is casually joking and having a good time, while the blue team is being a bit snarky and not really liking that Ryan is trying to take control. She asks for her knife and Paulie tells Devin to throw it at her, she gives him a dirty look.

Chef Ramsay asks Marino to open Hell’s Kitchen, Crystal Hefner is one of the diners tonight. Both the chef tables will be in use tonight. Melissa Rivers (Fashion Police) and Drew Scott will be in the blue kitchen while Drew’s twin brother, Jonathan will be joining actress, Ashley Greene (Twilight) in the red kitchen.

Right from the start the blue team is serving cold food, Ryan is messing up with crab cakes. In the red kitchen, Chef Ramsay starts them off right away with a VIP table. Matt is whining that everyone has help, but when they see him busy no one offers to help him. Matt gives Chef Ramsay the lobster tail, and when he is telling him about it, Matt grabs it and walks way. Chef Ramsay orders him to come back and tells him it is rubbery and overcooked.

Chef Ramsay is back in the blue kitchen and Ryan redeems herself with some great crab cakes. They hit their stride and complete their appetizers with no more hiccups. When they begin entrees, Shaina who is on garnish is holding all the dishes up. Shaina’s garnish is watery and everyone has to wait for her garnish again.

The red kitchen is waiting on Matt’s lobster tail, and Matt is being rude to his teammates, Andrew tells him to stop, that he doesn’t care how they get through dinner service, they just have to do it. Ashley Greene says being in the red kitchen is like being at an awkward family Thanksgiving dinner.

Chef Ramsay calls the red team into the back room. Matt starts whining that no one is helping him, and he is told all he had to do was ask for help. Matt is pissed off and jumps at Heather verbally, who responds. Andrew tells them to shut up. Chef Ramsay tells them to get it sorted out and not in front of the chef’s table in their kitchen. He tells them it’s the last time.

When they return to the kitchen, Chef Ramsay tells them to redo that table. Heather offers to help Matt and he says he is fine. Heidi brings up risotto and he is embarrassed. He tells the whole team to taste it, they say it is bland and Ramsay says it is disgusting. He orders them to start over again.

Meanwhile, the blue team has finally finished their appetizers and can start on entrees. Chef Ramsay calls out the first table which is VIP, not one person responds to him. Wendy is off in la-la land, and serves him raw, pink chicken.

Kimberly is behind in the garnish, Matt and Andrew ignore her and bring up their orders anyway. Kimberly serves him dry beans and Chef Ramsay orders the team to get out, it is only 45 minutes into dinner service. He tells them that he warned them it was the last time. Kimberly tries to apologize to the team.

The blue team are pushing hard and are determined to finish their dinner service. Devin is praying to get these last tickets out, but Wendy’s steak was overcooked and Chef Ramsay tells them to get out and pick two big names to be sent home.

Ryan is criticizing everyone’s work, telling them how to improve their service. Shaina is high on the list, but when the team brings up that her crab cakes stalled them, she says that wasn’t the issue, but if they put her up she will fight for her chance to stay, as everyone else on the team should.

The red team are talking about Matt’s faults, who doesn’t take responsibility for any of the things he does. Matt and Kimberly are at each other’s throats, Andrew tries to calm the situation and just asks everyone to vote, but Matt starts to argue and call Kimberly names again. Matt stands up and says he isn’t voting.

The teams gather in the dining room, Chef Ramsay says the word for tonight is DYSFUNCTIONAL! Heather says the first nominee is Matt and the other one is Kimberly. Paulie announces that Wendy is the first nominee for the blue team, the second one is Shaina. Each person is set to plea their case to Chef Ramsay, who looks fed up with most of the cooks.

When Matt is saying that he works hard for his team and that it is lack of communication, several red teammates shake their heads. Chef Ramsay asks Heidi what is going on and she tells him that Matt has an attitude and no one wants to talk to him. Matt cuts her off and says its hard for him to work with competition.

Chef Ramsay says it was a tough night and tough decision but the person leaving Hell’s Kitchen is Shaina. He tells her that she had got him excited at the beginning of the competition but she isn’t getting the momentum going and not ready to be his executive chef. Chef Ramsay announces he isn’t done yet, he tells Kimberly and Wendy to get back in line.

He calls Matt forward and tells him to listen to him. “When things went badly tonight, the first thing you did was point fingers at everybody else and you need to understand the only person to point at is you. Good luck!” Matt leaves with an attitude, saying if they were on the street right now, he would screw Ramsay up. Point blank.

Chef Ramsay tells the remaining chefs that he will not tolerate a night like this ever again, and tells them to piss off.

“Both kitchens performed horrendously tonight. I’m hoping that by eliminating Matt and Shaina, both teams will finally have a chance at success”
~ Chef Gordon Ramsay