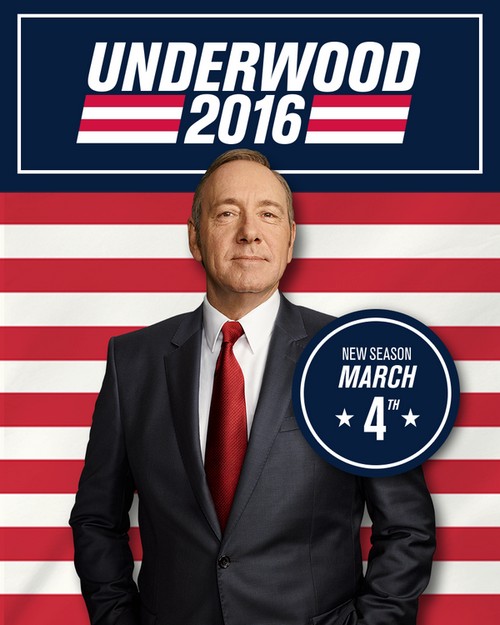 The Netflix original series “House of Cards” season 4 premiere is scheduled for March 4. President Frank Underwood [Kevin Spacey] and First Lady Claire Underwood [Robin Wright] are back and the secrets, lies and betrayal will continue. The preview video has been released and it appears things may turn deadly.

Frank Underwood rose to power by smoothly and seamlessly undermining political friends and allies. Then Senator Underwood’s power-hungry wife Claire has been by his side, not always in agreement, but doing whatever it takes to maneuver the power couple into the number one position in the world.

Though married for over two decades, Frank and Claire have never truly trusted each other. Their marriage is mostly one of convenience. Is Claire about to bring everything to a crashing halt?

In the preview video released by Netflix President Underwood, in a voice over, reveals, “You have no idea what it means to have nothing! You don’t value what we have achieved!”

A quick scene shows the Underwood with what appears to be their individual attorneys, facing off in the living room of their Washington home. Are President and Mrs. Underwood on the verge of divorce?

Someone, or many people, has discovered the web of deceit Frank and Claire have woven and begun to ask questions. Many of the quick clips in the preview show the president nearly exploding with rage, and what might be a physical confrontation with an unknown – at this time – assailant.

Claire must have something up her sleeve in season four of “House of Cards” because the first lady looks like the cat that ate the canary throughout the preview clip. Is she poised to blow the whistle on all of Francis’s lies in order to save herself from professional ruin?

The preview clip for the Netflix original series ends with Claire’s voice saying, “I saw a future. Our future.” Frank responds, “We had a future until you started destroying it.” What has Claire Underwood been up to and why does Frank Underwood believe his wife has destroyed it?

Get ready “House of Cards” fans – Kevin Spacey and Robin Wright are bringing Frank and Claire back on March 4.

Let us know in the comments section below and come back to CDL for the latest TV news.

House of Cards – Season 4 – Official TrailerWe had a future until you started destroying it.