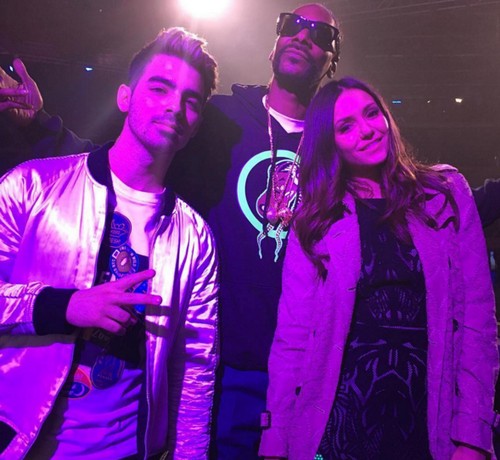 Ian Somerhalder must be afraid “The Vampire Diaries” cancellation is looming! The actor took to Twitter during the Friday, February 12 episode begging fans to tune in. While Ian was tweeting up a storm his wife Nikki Reed’s Twitter and Instagram accounts were suspiciously quiet. Nothing from Nina Dobrev that night either.

TVD has been moved to the kiss-of-death 8 p.m. Friday time slot on the CW. What does Somerhalder do to drum up interest? We’re not kidding – the actor was on Twitter asking viewers why they weren’t watching, telling them they better watch and asking what everyone thought of the new season of “The Vampire Diaries.”

Not only is there a possibility TVD is tanking, Ian’s wife Nikki just might serve divorce papers if the couple doesn’t get pregnant soon. Somerhalder and Reed just celebrated nine months of marital bliss and Nikki still isn’t sporting a baby bump.

Is this the same guy who was so gung-ho to marry and start a family with former “The Vampire Diaries” co-star Nina Dobrev? We thought Ian and Nikki wanted babies immediately, but as previously reported Somerhalder appears to have put the brakes on Nikki Reed’s pregnancy plans.

If Ian Somerhalder is desperately pleading with viewers to watch TVD, is the actor also secretly begging Nina Dobrev to take him back? Would Ian dump Nikki in a hot minute if Nina decided to give their relationship another try?

Many sources came forward and divulged that Ian was unbelievably jealous when Nina was grinding away with Tim Tebow on “Lip Sync Battle.” If you have a beautiful wife, one you told the world you adore via Instagram, why would one be jealous of an ex-girlfriend doing her thing with another guy on a television show?

Is TVD headed for cancellation? Let’s face it, Ian Somerhalder isn’t getting any younger –the actor is pushing 40 and not all that talented. The guy is lucky to even have a career at this point. Maybe it’s for the best that Nikki Reed avoid tying herself for life to Ian by having a baby. Nina Dobrev certainly was smart enough to break up with Ian.

Let us know what you think in the comments section below and come back to CDL for the latest Nina Dobrev news and gossip!

#FlashBackFriday … Take be back. All the way into a back bend. Call me Beckham from now on ⚽️🙋🏻 #BendItLikeBeckham (in case you didn’t get it… That reference is for you @cheeklane ) @alohaladies🌺