Is Kourtney Kardashian Still Sleeping With Justin Bieber: Did Affair Ever End – Couple Hooking Up? 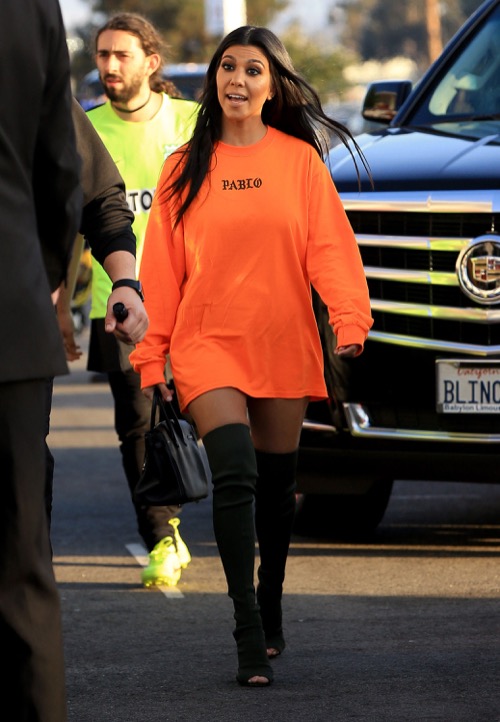 Kourtney Kardashian’s daring fashion choices as of late have people wondering if the mom of three is still sleeping with Justin Bieber. Just take a look at what Kourtney wore to Kanye West’s show the other night. That’s a pretty hot outfit for a woman pushing 40.

Is Kourtney Kardashian staying fit and dressing as if she were in her teens because the ‘Keeping Up with the Kardashian’ star is still hooking up with Justin? Kourtney is actually looking a lot like Selena Gomez used to these days, don’t you think? Maybe Justin Bieber doesn’t want to end the affair just yet.

Take a look at some of the most recent photos Kourtney posted to Instagram. Just a few days ago Kourtney posted a pic wearing denim short shorts, a denim jacket, a black top with a plunging neckline and knee high black boots.

Not your typical outfit for a 37-year-old mom of three, but hey, Kourtney is a Kardashian.

At first glance you may think this is a photo of Selena Gomez. Nope, it’s not. Kourtney Kardashian wrote, “I’m just too much for you.” Too much for who? Justin Bieber?

One more photo we’re going to mention from Instagram is one of Kourtney wearing even shorter denim shorts than in the other pic. Kourtney is wearing a light orange colored tank top that shows off her ample assets to their fullest.

We ask, did Kourtney and Justin ever call it quits on their affair? Kourtney is never taking Scott Disick back so the hot young look isn’t for Scott. Kourtney hasn’t been seen dating else anyone since the news hit that she was sleeping with Justin. So, is all this Kourtney Kardashian hotness for Justin Bieber?

Oddly enough, Justin hasn’t been photographed with any young ladies lately. His vacation last month seemed to be a guys-only event. There aren’t any ladies in any of the photos Justin posted. Is that because Kourtney is Justin’s number one lady?

The age gap isn’t that wide for Justin Bieber and Kourtney Kardashian – a mere 15 years separates the two.

Kourtney Kardashian is spotted at Kanye West’s ‘Famous’ visual premiere at the LA Forum in Los Angeles, California on June 24, 2016. By FameFlynet