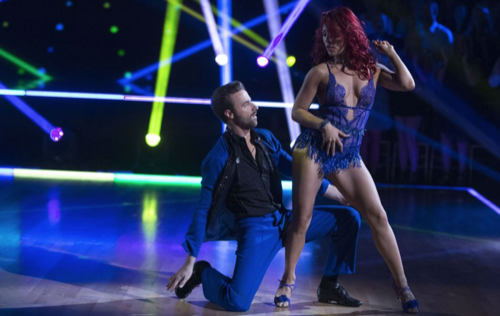 Tonight on ABC the glitz and the glamour returns to the ballroom as Dancing With The Stars returns for the fifth episode of the 23rd season. Canadian race car driver James Hinchcliffe & his professional dancer Sharna Burgess took the stage tonight and danced the Rumba for their Latin night dance to “Need the Sun to Break” by James Bay. Did you watch tonight’s DWTS episode? If you missed it we have a full and detailed recap, right here for you.  [LINK HERE] Did you miss any of tonight’s performance videos? If you did we have them all, right here for you!

Carrie Ann: No offense, but I think everyone else was just chips and salsa, and you brought the entrée, the enchiladas! That was incredible, the nuances and extensions of the arms, my goodness James, Whooo!

Pitbull: When they first came out, I thought they might have mixed up their wardrobes. No, seriously when you guys were practicing it was just the rumba, but when you came out here, it was LA RUMBA! Great job guys!

Julianne: The thing that I love so much about you is that people might not appreciate the subtleties you have. I think you are hands down the best male dancer that we have ever had on this show. The one thing that I am going to say this week is I feel like you should have had more chemistry between you two.

Bruno: I felt they should have gotten the Nobel Prize for chemistry! The way you stretch the lines, the continuity, it was peach perfect, you had all of that!

James wants to bring out the sexy side “if it exists”