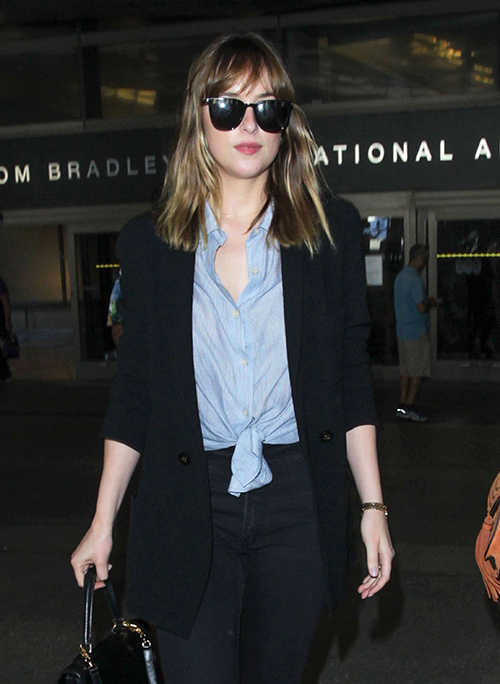 Jamie Dornan and Dakota Johnson’s Hollywood careers might be in jeopardy because of their dull and boring acting as Christian Grey and Anastasia Steele in the upcoming ‘Fifty Shades Darker.’ In fact, there’s speculation that ‘Fifty Shades Darker’ is going to be a major flop at the box office because Jamie Dornan and Dakota Johnson have once again failed to convince anyone that they are truly able to embody the sensual characters E.L. James created.

Jamie Dornan and Dakota Johnson have become household names thanks to their ‘Fifty Shades of Grey’ roles. And even though they were both highly criticized for their lukewarm acting in the first film, there’s a good chance that their less-than-convincing performances will end up damaging their Hollywood reputations for good. Critics have already called the teaser trailer for ‘Fifty Shades Darker’ dull and uninteresting, with more and more fans losing interest in the series altogether.

Surely, it doesn’t help that it’s been almost two years since ‘Fifty Shades of Grey’ hit movie theaters. The film made over $570 million dollars at the box office, mostly because moviegoers were intrigued to see the film adaptation of the successful soft-erotica book series. But now that fans know they shouldn’t expect Academy award-winning acting from Jamie Dornan and Dakota Johnson, there’s a good chance that the second film is going to be a complete disaster, with fans unwilling to fork over money to pay for a movie that will leave them utterly disappointed and bored.

Sure, Jamie Dornan might be considered one of the sexiest men in Hollywood, but many critics have called his acting skills wooden and his on-screen sex appeal as Christian Grey unconvincing. Even though Dakota Johnson received some praise for her humorous, cheeky take on Anastasia Steele, many fans still think she was miscast to play the female protagonist of the series.

Still, there’s no doubt that many Fifty Shades series fans will see ‘Fifty Shades Darker’ in movie theaters when it comes out on Valentine’s Day next year. And while it probably won’t make $570 million dollars at the box office the same way the first film did, it will still generate plenty of interest in the media, especially for those wanting to see just how badly the film will do.

No one wants a major movie flop on their Hollywood resumes, but for Jamie Dornan and Dakota Johnson, they have no choice but to hope and wait that ‘Fifty Shades Darker’ won’t make them the laughing stock of the entertainment industry. Do you agree, CDL readers?