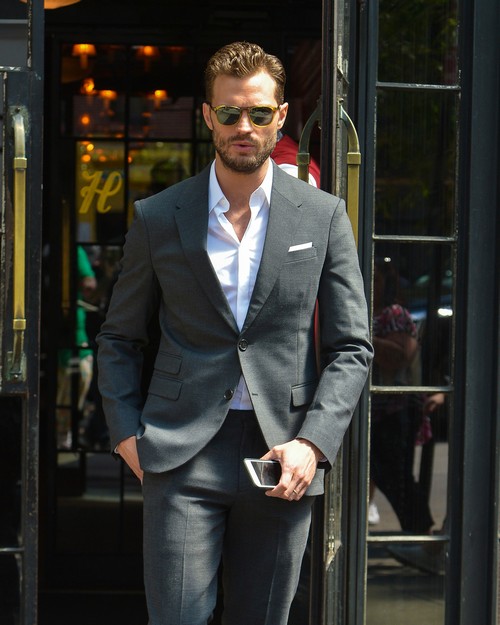 Jamie Dornan was virtually unknown before he replaced actor Charlie Hunnam as Christian Grey in ‘Fifty Shades of Grey.’ Whereas Charlie Hunnam didn’t want to jeapordize his acting career by playing a sex addict in the film adaptation of the popular ‘Fifty Shades’ series, Jamie Dornan agreed to the role without any reservations.

New/Old photo of #JamieDornan taken on 3rd Sept in Co. Donegal, Ireland. Thanks to Pat Murray for sharing on my FB page. Pat said of Jamie “He was so modest and down to earth, and a real lovely guy.”

In a new interview with Britain’s The Morning Jamie Dornan admitted that being attached to the ‘Fifty Shades’ franchise can be seen as a burden, mostly because it’s made him a worldwide star. He said, “It can be, but that’s just one job. To me or any actor that is involved in any franchise, it is just another job and you move on to the next thing.”

By already thinking about his post-Fifty Shades future, Jamie Dornan is making it clear that he is treating his Christian Grey fame as nothing more than a Hollywood paycheck. Unfortunately, Jamie Dornan is contractual obligated to star in the films, whether he likes it or not.

Sure, the actor is getting paid a whopping salary for his work, but Jamie Dornan has the same aspirations as Tom Hiddleston, Eddie Redmayne, Jonathan Rhys Meyers and other actors who dream of Golden Globe and Oscar winning roles. Jamie Dornan knows that sooner or later he is going to have to shed his Christian Grey image if he wants to move on to bigger and better things.

Tell us CDL readers, do you think Jamie Dornan is thinking about quitting his Christian Grey role? Is he regretting his ‘Fifty Shades’ involvement? Let us know what you think by dropping us a line with your thoughts in our comments section below. And of course, check back with CDL for all the latest updates on Jamie Dornan and the Fifty Shades franchise right here.