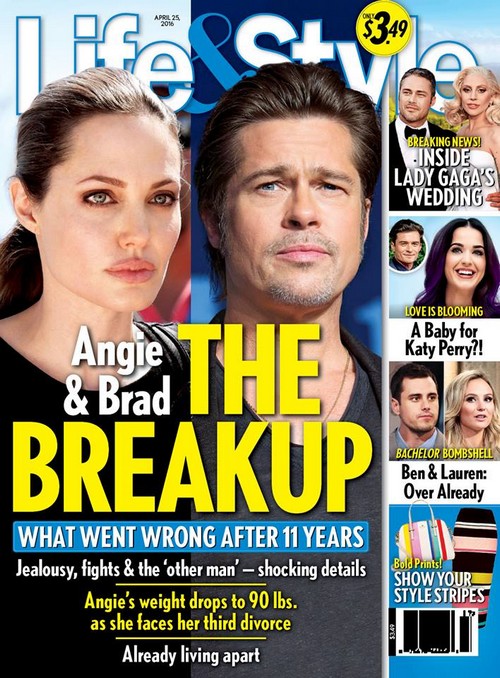 Jennifer Aniston may be People’s “Most Beautiful Woman 2106” but she’s still reportedly bitter over her split with Brad Pitt due to Angelina Jolie more than a decade ago and is said to be gleeful over the divorce news. Life & Style recently reported that Angelina Jolie and Pitt are splitting after 11 years.

Angelina Jolie and Brad Pitt seem to be a study in opposites lately. She’s withering to a 90-pound husk while he’s looking soft and bloated. Plus, it looks like their busy film careers and half a dozen kids are making it impossible for them to get any quality time together.

Jolie may also be struggling with her hormones after having her ovaries removed and starting hormone replacement therapy – other media outlets are reporting Angie has told him she no longer finds him attractive – and their reportedly vigorous sex life was what kept the spark in their marriage.

Jennifer Aniston has struggled with divorce rumors of her own in the wake of marriage to Justin Theroux and his reported ongoing contact with his ex Heidi Bivens, so the tabloid covers of Jolie and Pitt must give her some small comfort that her marriage is not the only one rumored to be on the rocks.

Plus, Angelina is said to be upset over Brad Pitt “mentoring” a number of sexy young actresses including Latin beauty Selena Gomez and model turned actress Carla Delevingne. Angelina Jolie in her prime was hotter than either of them – but in her withered state, she lacks the spark she once had.

It also can’t be easy for Jolie to see Jennifer Aniston gracing the Mother’s Day issue of People Magazine as the “World’s Most Beautiful Woman” while her own looks are fading, perhaps as a result of her many health concerns.

Is Angelina Jolie worried Brad Pitt regrets the Aniston split when he sees how well his ex is holding up while his wife is falling apart and wasting away before his eyes? There have also been whispers of Pitt’s flirtations with one of the couple’s nannies and French beauty Marion Cotillard.

It’s easy enough to dismiss the split rumors as more tabloid fodder, but you have to consider that where there’s smoke, there’s fire – and celebrity denials of divorce are usually fibs to keep fans flocking to their films while they dismantle their marriages in private.

Ben Affleck and Jennifer Garner’s divorce rumors turned to fact despite denials as did Blake Shelton and Miranda Lambert’s split. Yolanda Foster and David Foster fought rumors before they admitted their split as well. It’s the way celebrities operate…

So while Brad Pitt may not be packing his bags just yet, the split talk may be much more than just tabloid fodder. What do you think? Is an Angeline Jolie and Brad Pitt divorce inevitable? Will this passionate duo be pulled apart by their busy lives and other lovers?

Share your comments below and come back to CDL often for more celebrity news update.