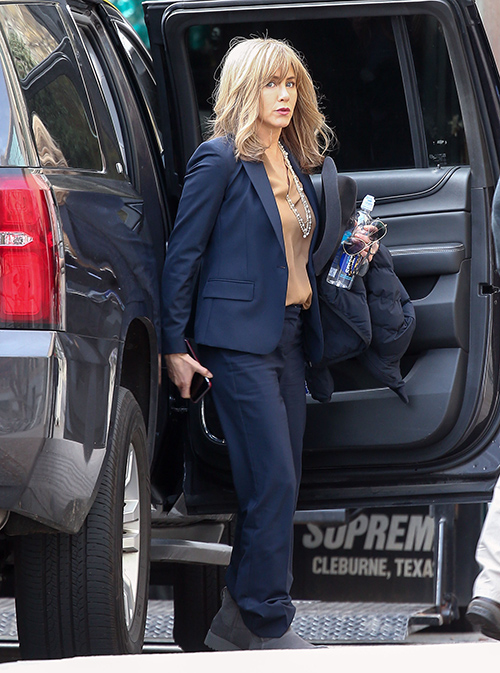 Jennifer Aniston has perspiration anxiety? Does Jen have such an overwhelming fear of sweat that the actress demands assistants carry fans around everywhere and fetch ice cubes on command? No one likes to sweat, but an assistant to the star recently revealed to Star that Aniston takes things to the extreme. Let’s not get ahead of ourselves here, but could Jennifer really be worried that someone will expose that Aniston is menopausal?

According to the insider Jennifer demands that someone, anyone, carry around an electric fan during hot and humid filming days. The assistant will then need to hold the wind blower right in front of Jen between scenes. And if that doesn’t keep Aniston cool enough, the source divulged, “If [Jen] feels herself warming up, she’ll snap her fingers for someone to grab ice cubes out of the freezer.”

Whomever runs to fetch the cubes then has to press them to Aniston’s forehead. The insider likened this to “peasant working for a queen!” What’s up with all the fans and ice cubes? Seriously, is Jennifer Aniston pre-menopausal? Menopausal? It wouldn’t be unreasonable to believe that a 46-year-old woman would be going through the change of life, right?

Is Jennifer trying to hide the change from new hubby Justin Theroux? As previously reported, the couple would like to start a family. If Aniston is going through this normal adjustment in life, then a biological baby may not be in the cards.

Is that why there have been a plethora of reports that Jennifer and Justin are adopting a child? Lots of allegations about in vitro fertilization procedures, too. Did Jen have her eggs frozen for just this eventuality?

Whatever the reason, it must be a hilarious sight to see someone running around grabbing ice cubes out of the freezer. Does Jennifer Aniston have someone schlep her own ice to the set? Or is there yet another assistant in charge of making fresh ice all day long?