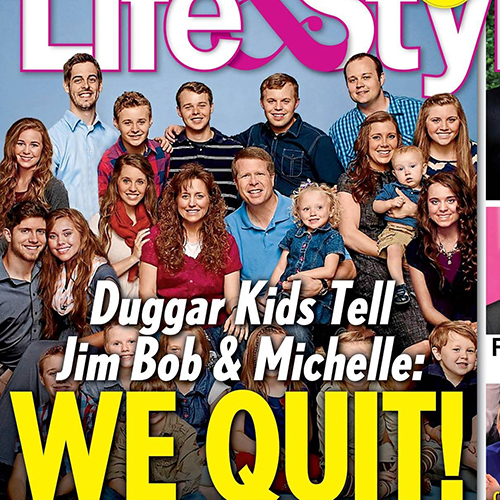 19 Kids and Counting stars Jim Bob Duggar and Michelle Duggar keep trying to cash in on their 19 kids as reality television stars. Reportedly, the children want out. If Jim Bob and Michelle won’t stop exploiting the kids, the Duggar brood just might decide to start spilling Duggar family secrets. The cover of Life & Style proclaims that the Duggars television show is “in ruins,” there’s a new scandal that has apparently left everyone “embarrassed and angry,” and the family’s infighting is out of control.

Jessa Seewald and Jill Dillard most likely won’t be the ones giving up on reality television. The anticipated multiple pregnancies of the sisters could keep TLC money rolling in for years to come with ‘Counting On.’

Jinger Duggar is engaged to Jeremy Vuolo and the couple is planning a wedding. After Jinger and Jeremy wed, we’re certain that baby news will quickly follow. Jinger, who seems to bask in the spotlight, will probably join ‘Counting On’ with sisters Jessa Seewald and Jill Dillard

Anna Duggar has been humiliated enough by Josh Duggar, the eldest of Jim Bob and Michelle’s children. Anna would be smart to bow out, and it wouldn’t surprise anyone if twins Jana Duggar and John-David Duggar are sick and tired of being used by Jim Bob Duggar and Michelle Duggar in order to keep the family coffers full.

The youngest Duggars have no choice but to let mom and dad exploit them further. Most of them have grown up on television and have no clue what it’s like to live life without a camera crew hanging around.

The older Duggar children might need to step in and advocate for their younger siblings. If that means giving interviews or writing tell-all books that expose family secrets, would anyone blame them?

Maybe it’s time for Jim Bob Duggar and Michelle Duggar to stop using their kids to keep up their lavish lifestyle. If the older Duggar kids finally band together and quit, then maybe TLC will finally give up and stop filming Duggar daughter engagements, weddings and births.

Happy birthday to my sweet Mom! Today I’ve compiled a list of 101 things I love most about her! Check it out! :link in my bio:

LINK IS IN MY BIO! www.TheSeewaldFamily.com