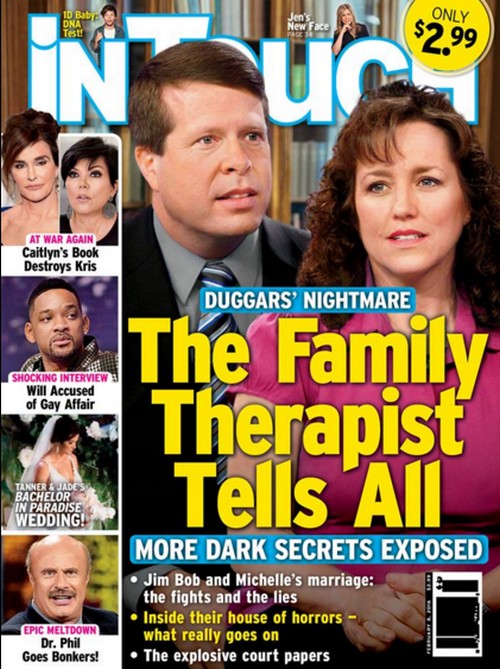 Josh already molested Jana Duggar, Jill Duggar and Jessa Duggar. What’s to stop the oldest son of Jim Bob and Michelle from doing it all over again? Michelle and Jim Bob have four minor daughters left living at their Arkansas compound. And let’s not forget, Josh has two young daughters. Anna Duggar must be as scared as Michelle that the admitted cheater will lay hands on his own children.

Jill Dillard and Jessa Seewald appear to have moved on and left the molestation in the past. Jana Duggar is another story. The oldest of the Duggar sisters, Jana hasn’t married – there haven’t even been reports that Jana has anyone interested in courting her.

The most recent cover of In Touch claims that Jim Bob Duggar and Michelle Duggar are fighting and there is allegedly a lot of lying going on. Apparently there are some “explosive court papers” and their home is Arkansas is “house of horrors.”

As previously reported Anna Duggar and her four children are living in a closet at the mansion. That’s pretty horrible. It’s no secret that the older Duggar kids have been saddled with the care of their younger siblings. That doesn’t sound like a fun childhood.

No one is quite sure how much longer Josh Duggar will remain at the faith-based Reformers Unanimous facility in Rockford, Illinois. Anna has visited Josh a couple of times and has revealed a few details in interviews. But as of right now no one is talking about when Josh will return to Arkansas.

If Jim Bob Duggar lets Josh Duggar come home post-rehab will Michelle Duggar file for divorce and kick both her husband and her son to the curb? Mama Duggar’s first priority should be protecting all the minor children at home. Josh is a grown man with a family of his own – let Anna deal with Josh’s problems. Perhaps the best thing Anna could do is divorce Josh and go home to her family.