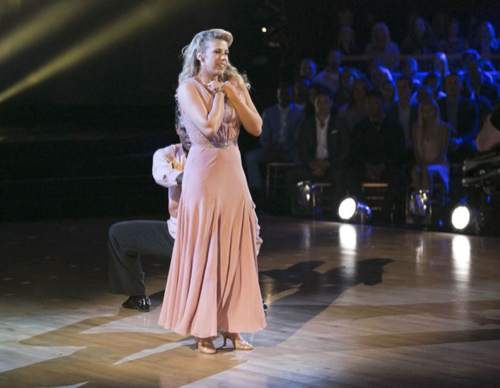 Tonight on ABC the 10 celebrities returned to the “Dancing With The Stars” Ballroom for “Disney Night.”  Jodie Sweetin & her professional dancer Keo Motsepe hit the dance floor and danced a Cha Cha routine to “Try Everything” from Walt Disney Animation Studios’ “Zootopia”.  Did you watch tonight’s episode? If you missed it we have a full and detailed recap, right here for you.  Did you miss any of tonight’s performance videos? If you did we have them all, right here for you!

Judges comments on Jodie’s DWTS Week 4 Cha Cha: Zendaya: “You kept going even with a smile on your face, as long as you continue with your held up high that is all that counts.” Bruno: “You stumbled in the jungle. You covered it to your best ability. When you come back, get that wow factor out of you that is what we want to see.” Carrie Ann: “It was an underwhelming performance. It is nice to receive all the energy, work on the trust.” Len: “It was full on, you made a go. What it was, you went wrong and you hoped nobody noticed, but they did.”

Watch the video below and let us know what you think, do you agree with the judge’s comments? Do you think Jodie did enough to avoid elimination tomorrow? Sound out in the comments and let us know your thoughts?