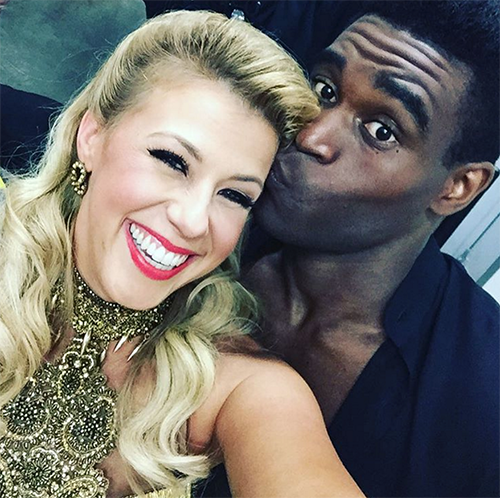 Jodie Sweetin’s ‘Dancing With the Stars’ partner Keo Motsepe was injured when he was hit with a mic pack during rehearsal. The dancing professional took a hit to a very sensitive male area on Thursday, March 31.

TMZ shared the accident, which was caught on tape. Jodie and Keo are shown practicing the foxtrot for the Most Memorable Year-themed third week of the 22nd season of ‘DWTS.’ Jodie’s microphone pack came loose and the pack swung around, catching Keo directly between the legs.

The pain of getting hit in the genitals stopped Keo in his tracks. He immediately let go of Jodie, grabbed the area that had been hit, turned, and walked away. When played in slow motion, the microphone pack seems to hit Keo in the ankle first and then bounce up and hit him Keo in the crotch.

In the video, you can hear Jodie tell Keo to sit for a minute and breathe. Jodie explained, “I tried to catch it too but we were like this” – and then Jodie demonstrates for Keo the framed position the dancing partners had been in when the microphone pack came loose and smacked Keo in his genitals.

The explanation of how Jodie tried to keep the accident from happening didn’t help much. Keo Motsepe is heard saying to Jodie Sweeten, “You’re making it worse. You’re making it worse.”
This is Keo’s third season as a ‘Dancing with the Stars’ professional dancer. He finished in last place during the 19th season when his partner was Olympic athlete Lolo Jones.

During the 20th season of ‘Dancing with the Stars,’ Keo’s dancing partner was model and actress Charlotte McKinney. The couple finished in 11th place. Season 21 wasn’t good to Keo either. Motsepe was partnered with Grammy-winner Chaka Khan and they were voted off in the third week.

The dancing pro and the ‘Fuller House’ star have had middle of the road scores and need to impress judges Carrie Ann, Len, and Bruno during week three.

Hopefully the South African born dancer’s injury won’t keep Keo Motsepe and Jodie Sweetin from performing the foxtrot on Monday’s ‘Dancing with the Stars.’ Most likely, a couple hours off the dance floor and an ice pack helped ease the pain.