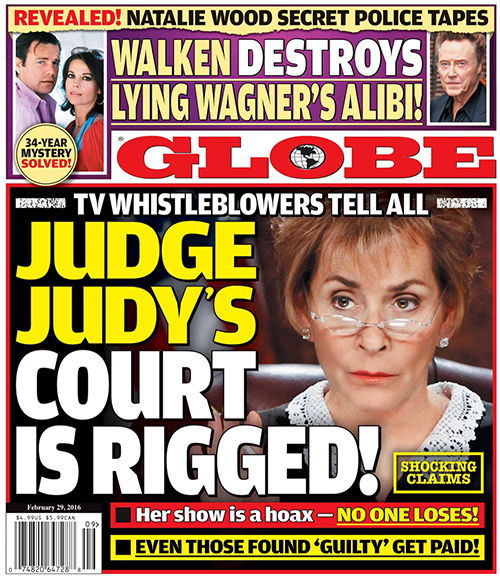 There is no real justice in Judge Judy’s courtroom! All the judgments are phony! Are these real-life courtroom dramas a sham? Did you know everyone, including the plaintiffs, defendants, and witnesses get paid?

GLOBE thinks it has discovered a HUGE expose! An insider shared a SHOCKING letter that prospective guests receive from producers of the show. Everyone whose case is accepted gets money. Yep, no matter in whose favor Judge Judith Sheindlin rules, there’s a payday coming.

All parties are guaranteed an appearance fee anywhere from $150 to $500. And all travel costs and hotel bills are covered. Is this really a surprise?

There’s a disclaimer at the end of each show that reads something like this, “Both the plaintiff and the defendant have been paid from a fund for their appearance. The amount, if any, awarded in the case, is deducted from this fund, and the remainder is divided equally between both litigants. The amount of the fund is dependent in the size of the judgment.”

Sure, Judge Judy does go off on people in the mock courtroom despite the fact that no one is really held accountable for bad behavior. You may ask, what’s the point of all that? Who in their right mind would want all the nasty underhanded things they did exposed – and not get paid?! What witness would take time out of their life to come testify if there is no money involved?

Also, why would anyone pay their own travel expenses and hotel bill to recoup a few hundred dollars? Okay, sometimes a few thousand dollars? Airline tickets aren’t cheap, and we’re guessing a decent hotel room is still pricey. Plaintiffs, defendants, and necessary witnesses need to eat – and dining out in LA can’t be cheap.

Judge Judith Sheindlin isn’t doing anything wrong. No one is trying to con the public into thinking when a defendant loses they actually pay the plaintiff! Sorry, no deep, dark secret has been buried! No insider leaking the letter is necessary. Anyone at any time could, and probably has, shown the letter to someone, don’t you think?